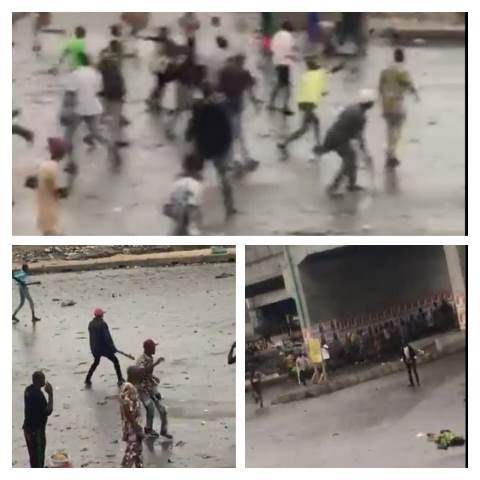 There was mayhem in Iyana-Iba area of Lagos, Southwest Nigeria as factions of the Road Transport Employers Association of Nigeria (RTEAN) clashed.

Two people were feared dead in the mayhem as dangerous weapons were freely used by the factions.

It was gathered that the battle of supremacy was over who should control a new park at Iyana-Iba.

A trending video on social media saw police officers watching and doing nothing as the hoodlums clashed. throwing stones and using other dangerous weapons.

But the Lagos State Government said it is investigating the union fracas that occurred at Iyana-Iba and Lagos Island.

He warned the protesting members of Road Transport Employers Association of Nigeria (RTEAN) not to disrupt the peace and tranquility being enjoyed in the State.

The Special Adviser to the Governor on Transportation Hon. Sola Giwa gave this warning today after fracas broke out in some parts of the State following a protest by some RTEAN union members demanding the removal of the National President of their Association.

Addressing the protesting members, the Transport Special Adviser called for calm, saying that the Government would not tolerate the breakdown of law and order in the State.

He added that the commissioner of police has been duly informed and that he has deployed officers to the affected areas to deal with erring members of the union.

The Special Adviser said the State is investigating the allegations leveled against the National President of the union and would resolve every lingering issue calling on members to maintain peace.

“The government has listened to your outcry, we urge you to maintain peace as we will not hesitate to invoke the Lagos State riot act when necessary,” added.