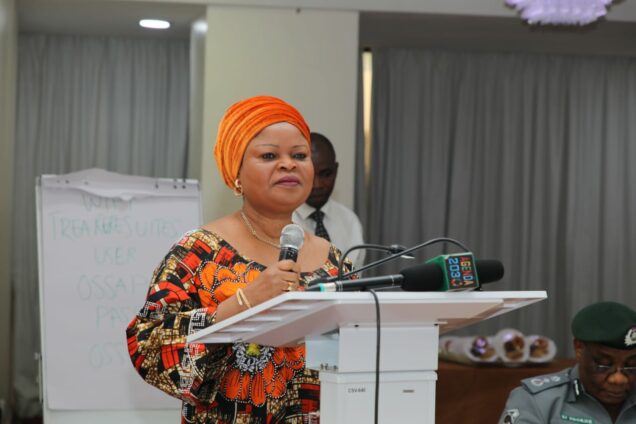 Princess Adejoke Orelope-Adefulire assumed office with solid experience and passion for interventions aimed at alleviating the plight of the vulnerable when she was appointed by His Excellency, President Muhammadu Buhari to provide leadership for Nigeria’s efforts to achieve the Sustainable Development Goals, SDGs in 2016.

As a former lawmaker, Commissioner for Women Affairs And Poverty Alleviation and a former Deputy Governor, Princess Orelope-Adefulire has been at the vanguard and had championed activities related to most of the 17 goals and 169 targets of SDGs for the over 30 years of her public life.

In 32 years of public service, she has carved a niche for herself as an accomplished grassroots politician, with a passion for the emancipation of the womenfolk and youth development, especially in the area of girl-child education.

As a Deputy Governor, she co-sponsored the Child Right’s Law as well as the Domestic Violence Law in Lagos State (2007). She equally facilitated the establishment of 22 functional Skills Acquisition Centres for the unemployed young men and women and a 176-Bed Transit Home for the victims of domestic violence and abuse. The Centres have trained and empowered thousands of young men and women to be economically self-reliant.

She has promoted routine medical screening for women, supported the Girl-Child Education Initiative and built the First Multipurpose Home/Clinics for children with Disabilities in Lagos State in order to provide succour to the parents, especially the mothers of children with disabilities. Indeed, her passion for the underprivileged and the vulnerable has earned her the appellation of ‘Iya Alaanu’ (merciful mother) by her admirers.

Her strides in poverty alleviation, for instance are still very visible in the many still functional vocational centers established during her tenure as commissioner and deputy governor, just as the institutional framework and structure she championed in Lagos has now become the model for tackling challenges of Gender Based Violence in the country.

For her therefore, the responsibility of driving Nigeria’s wheel of SDGs as graciously put on her shoulders by President Buhari in 2016 was another opportunity to continue to deliver on her passion. And indeed, she has led the Office with uncommon passion in the job of putting in place the institutional framework and forging the partnership – horizontal and vertical – required to deliver on 2030 Agenda in Nigeria. As the SSAP-SDGs, she has provided strategic direction and guidance for the implementation of the 17 SDGs at the national and the sub-national levels in Nigeria while also representing the country at global events on issues related to SDGs at the global level.

A testimony of that effective leadership took place few days before her 63rd birthday at the sidelines of the 77th session of United Nations General Assembly when Nigerian government led by President Buhari, recorded another feat in her efforts to achieve the SDGs with the launch of Nigeria’s Integrated National Financing Framework (INFF) for Sustainable Development. President Buhari and others at the event noted that the launch of INFF Report was as a significant milestone in the commitment and efforts to achieve the SDGs in Nigeria working at the National and Sub-national levels. Even more significantly, the successful design of the INFF framework again spotlighted the leadership role of Nigeria in efforts to institutionalize the SDGs in the global South under the leadership of Orelope-Adefulire.

Few weeks before the New York event, Nigeria had also became the first country in the Global South to have successfully completed a Country-led Independent Evaluation of SDG-3 on ‘quality health and well-being for all’ and SDG-4 on ‘qualitative and inclusive education and lifelong learning for all’ with the reports of the evaluation launched to the commendation of all stakeholders in Abuja.

Also, on 21st of December, 2021, Nigeria became the first African country to successfully realigned its National Statistical System with the requirements and indicators of the SDGs, while in 2019, the country also successfully domesticated the Integrated Sustainable Development Goals Simulation Model (iSDG Model) as a home-grown analytical tool for evidence-based SDGs policymaking and planning.

The iSDG report was launched on the margins of the 74th Session of the United Nations General Assembly by President Muhammadu Buhari. Such feats are also result of the close collaboration and partnership by OSSAP-SDGs with the Federal Ministries, Departments, and Agencies (MDAs) on integration of the SDGs into sectorial policies and plans. Significantly, at the Sub-national level, OSSAP-SDGs has also been working closely with the 36 states and the Federal Capital Territory (FCT) to mainstream the SDGs into their medium and long-term development policies and plans in the bid to achieve the Agenda of “Leave No One Behind.”

With the support of the UNDP, OSSAP-SDGs has supported 16 states to develop SDG-Based Development Plans as part of Nigeria’s Mainstreaming, Acceleration and Policy Support (MAPS) for the Agenda. Aside such institutional frameworks, Prince Orelope Adefulire has also not been found wanting in terms of ‘brick and mortar’ direct interventions needed to drive the goals and targets of sustainable development agenda in Nigeria.

In this vein, a record number of projects and initiatives aimed at accelerating Nigeria’s race to the achievement of SDGs goading have been executed under her leadership in the past six years. These include construction of 8,008 classrooms and renovation of 305 with furnishing to strengthen basic education across the country as well as supplied a total of 4,845 Desktop and Laptop Computers to schools across the country for Information and Communication Technology (ICT) training. Those who have met her will testify that one of her utmost desires was that no woman should die giving birth.

According to her, a pregnancy experience should be followed by a safe birth in which the Mother, the child or the children, in the case of multiple births, return home to celebrate new addition(s) with other members of the family.

With the quest to bring down maternal and child mortality rate in the country, she has led OSSAP-SDGs to carry interventions in the health sector, across states and communities in Nigeria.

At the last count in 2021, OSSAP- SDGs has carried out a total of 195 interventions in the health sector across Nigeria. These are in the form of construction of Primary Healthcare Centres (PHC) and Mother and Child Centres, complemented with the supply of 199 Intensive Care and Rural ambulances, about 257 incubators while 7,464 regular and automated hospital beds were supplied to the health facilities. Her passion for youth empowerment, job creation and poverty alleviation as embedded in goals 1, 2, 8 and 10 of SDG has led to OSSAP-SDGs investment in Vocational and Skills Acquisition Centres across the country with 66 of such facilities delivered to date.

Some of the other key intervention of OSSAP-SDGs include supply of 1,294 transformers; provision of 19,266 solar-powered streetlights; 300 Housing units for internally displaced persons (IDP) in Borno State; and 925 Solar Boreholes. In partnership with states, OSSAP-SDGs has also intervened with 732 Water and Sanitation facilities; 494 Health facilities (new facilities and Renovation/Rehabilitation; 616 Education facilities (New Construction, Renovation/Rehabilitation of Block of classrooms; while 1,150 Women and Men were empowered/trained in Vocational skills, such as Sewing, Knitting, Detergent & Pomade making etc.

Princess Orelope leadership of OSSAP-SDGs has been commended by her boss, President Buhari, Vice President Yemi Osinbajo, Ms Amina J. Mohammed, the Deputy Secretary General of United Nations and other stakeholders at various times. “The Office of the Senior Special Assistant to the President on SDGs has continued to provide technical leadership in the operationalization of the SDGs at all levels of governance in Nigeria,” the President said in New York while launching the INFF.

For her efforts, Princess Orelope-Adefulire has received several awards locally and internationally. In 2020, she was also a recipient of Honorary Doctor of Arts (Poverty Alleviation and Technology Incubation) from Lagos State University, LASU (December, 2020).

In recognition of her contributions towards the attainment of SDGs 8 and 10 in Nigeria, Princess Orelope-Adefulire was on May 10, 2019 inducted as a Fellow of the Global Membership Platform of the Association of Business Executives (ABE) in United Kingdom.

She was awarded the International Public Servant of the Year Award in 2007 by the Scottish Widows – a UK-based Non-Governmental Organization (NGO), and bagged the Lagos State Man of the Year Award in 2009. She received the Daisey George Award 2010 in USA, as an advocate of children’s protection and development. In 2018, she was honoured by the International Women’s Society (IWS) in recognition of her efforts at empowering and defending the rights of women, youth and children.

She is a recipient of the Guinness World Records for the most children reading aloud with an adult at a single location, which she achieved while reading with 4,222 school children in 2011.

As she clocks 63 on 29th September, 2022, we join her family, friends and other well-wishers to say happy birthday to this ultimate champion of SDGs. We wish her many more cheerful years of service to humanity.