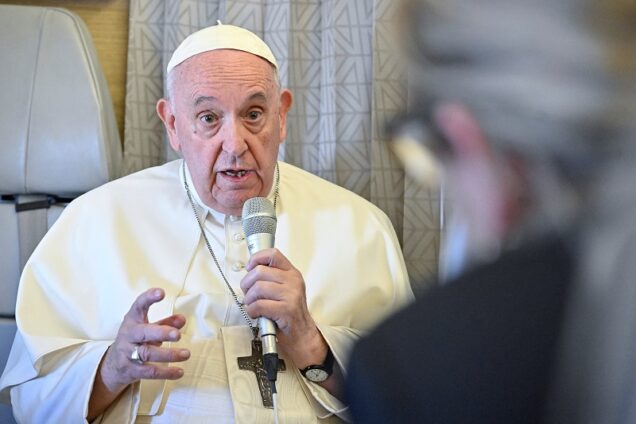 Pope Francis answers reporters' questions during a conference aboard the papal plane on his flight back to Rome after visiting Nur-Sultan, Kazakhstan, 15 September 2022. ANSA/Alessandro Di Meo/ POOL via REUTERS

Pope Francis said he was involved in efforts to organize a prisoner exchange in Ukraine, although it was unclear what role he played.

He mentioned his efforts while addressing a meeting with Jesuits in Kazakhstan last week, according to local media.

The pope said he received a steady number of visits from the Ukrainian people and officials who told him about the war.

One was a military officer who focused on prisoner exchanges and brought him a list of more than 300 prisoners.

The pope said the officer “asked me to do something to make exchange possible. I immediately called the Russian ambassador to ask if something could be done; if a prisoner exchange could be expedited.”

Ukrainian and Russian forces exchanged around 300 prisoners of war last week after previous swaps earlier in the war.

Pope Francis’ private meeting with the Jesuits took place on Sept. 15 in Kazakhstan, after he attended a meeting of international religious leaders there.

He reiterated his view that the conflict following Russia’s attack on Ukraine is a “third world war”.