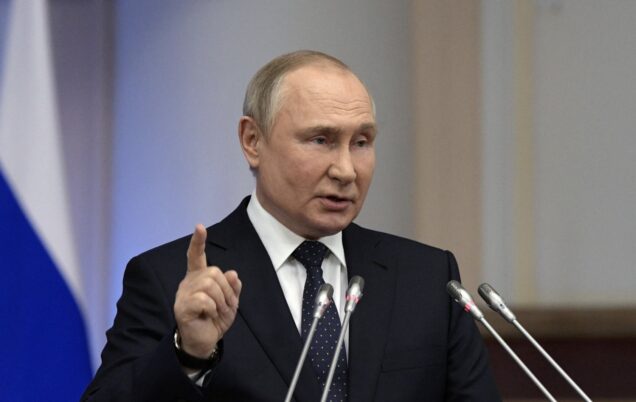 There is anger as Russia announces annexation of four Ukrainian territories it captured in the ongoing war in Ukraine.

The territory annexed are: Donetsk, Luhansk, Kherson and Zaporizhzhia regions.

An illegal and disputed referendum enabled Russia to lay claim to the territories captured during the ongoing war.

The West condemned them as shams held under gunpoint and what Putin has just announced is illegal under international law, according to BBC.

President Vladimir Putin, in his speech said the people of the four Ukrainian regions annexed had made their decision.

“The results are known, well known. People made their choice – the only choice,” he said.

“I’m sure that the Federal Assembly will support the four new regions of Russia, four new subjects of the Russian Federation… because this is the will of millions of people,” he said.

Putin said he wanted everyone in Kyiv and the West to hear that those in the Donbas region would become Russian citizens forever and that Kyiv authorities should take this expression of will with great respect.

According to him, Russia would protect its land with all the means it has to provide safe living for the people and would rebuild the ruins in towns and villages and develop infrastructure and health care and education.

Putin described the West as being “greedy”, saying it wanted Russia to be its “colony”.

Putin urged Ukraine to immediately stop firing and return to negotiations, while stressing that the citizens of Luhansk, Donetsk, Zaporizhzhia and Kherson had made “their choice,” adding that the annexation of Ukrainian territory was now non-negotiable.

But the European Council, which brings together EU leaders, has firmly rejected and unequivocally condemned Russia’s annexation of Ukrainian territories, which it said had no legal impact.

According to the Council, Russia had blatantly violated the fundamental rights of Ukraine to independence, saying they would never recognise this illegal annexation.