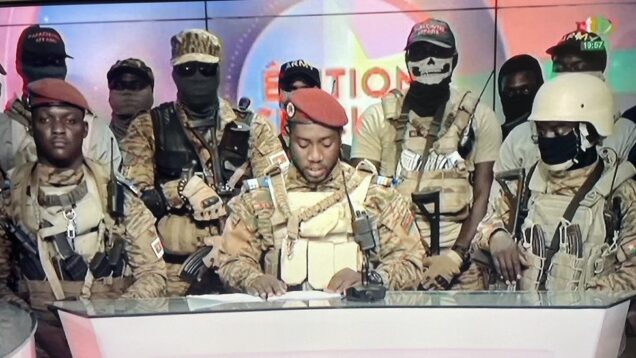 Captain Traore takes over in Burkina Faso after staging a coup. photo: BBC

Traore cited Lt Col Damiba’s inability to deal with an Islamist insurgency as the reason.

Reuters quoted Traore as saying that a group of officers who helped Damiba seize power in January, had decided to remove their leader due to his inability to deal with a worsening Islamist insurgency.

“Faced with the deteriorating situation, we tried several times to get Damiba to refocus the transition on the security question,” said the statement signed by Traore and read out by another officer on television, flanked by a group of soldiers in military fatigues and heavy armour.

Damiba had ousted former President Roch Kabore in January, in part for the same reason.

The constitution has been suspended and the transitional charter dissolved, borders are closed indefinitely and all political and civil society activities are suspended, Traore said. He declared a curfew from 2100 GMT to 0500 GMT.

Earlier on Friday, Lt Col Damiba urged the population to remain calm after heavy gunfire was heard in parts of the capital.

According to the BBC, before dawn, shots and explosions were heard in the capital, Ouagadougou, some of them coming from near the presidential palace and main military barracks.

After sunrise, the normally bustling city was largely deserted, with soldiers on the streets blocking some roads and guarding key strategic points.

State television had stopped broadcasting and more gunfire was heard later in the day.

According to the statement, Damiba had rejected proposals by the officers to reorganise the army and instead continued with the military structure that had led to the fall of the previous regime.

“Damiba’s actions gradually convinced us that his ambitions were diverting away from what we set out to do. We decided this day to remove Damiba,” it said.