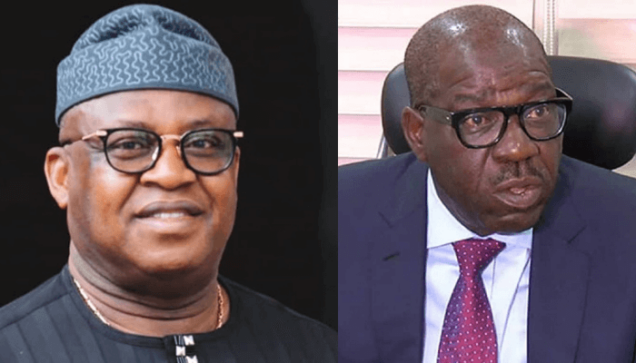 Orbih, with the strong backing of Wike has been involved in a tussle with Obaseki for the control of Edo chapter of PDP.

Obaseki, a former member of the All Progressives Congress APC defected to PDP, contested for the last governorship election on the party’s platform and won.

But the two camps have bee fighting for the control of Edo PDP since Obaseki won the election on the party’s platform.

The tussle for control led to conduct of parallel primaries that produced different candidates for elective positions in the forthcoming 2023 poll by the two factions last May.

Orbih’s faction had also produced all delegates that participated in the PDP presidential primary that produced Alhaji Atiku Abubakar as the flag bearer of the party for the 2023 election.

Wike had repeatedly mocked Obaseki who is not in his camp in PDP for losing the control of the Edo faction of the party to Orbih.

The Rivers State Governor had, for instance, blasted Obaseki for rejoicing when Atiku was announced as the winner of PDP presidential ticket, while none of the delegates from Edo that voted during the exercise were from his faction of the party.

The Independent Electoral Commission, INEC had published the list of the candidates produced by the Orbih faction as the recognised contestants for the PDP from Edo State in the 2023 election.

INEC said its decision was based on earlier court order declaring the Orbih faction the authentic executive of the party in the state.

However, the victory of Orbih’s camp was short-lived as a Federal High Court sitting in Benin City on Wednesday ordered the INEC, to recognise and publish the names of candidates produced by the Obaseki-led faction of the Edo PDP as standard-bearers of the party in the forthcoming 2023 elections.

In that judgment delivered by Justice S. Shuaibu, the court granted all the reliefs sought by the plaintiffs.

Among the reliefs sought by the plaintiffs were an order of court mandating the fourth defendant, INEC, to publish the names of the plaintiffs as the validly elected candidates of the Edo PDP for the 2023 general elections.

“In my view, the power of INEC under Section 84 of the Electoral Act is limited to monitoring of party primary elections and does not extend to preparing or declaring the results of that election. This remains the law.
“In the light of the foregoing, INEC cannot rely on results prepared by the first defendant, Edo PDP.”

The Supreme Court ruling on Friday toed the same path in the suit an order to authenticate the ad hoc delegate elections conducted by Orbhi’s faction and to invalidate another one conducted by Obaseki’s faction.

The Apex Court in a judgment by Justice Emmanuel Agim, held that the issue of leadership by political parties is an internal affair and as such, the courts have no jurisdiction.

In the appeal marked SC/CV/979/2022, filed by Monday Osagie, the Supreme Court said that the appeal lacked merit because it is not justiciable.

Agim who delivered the unanimous judgment asked political parties to always adhere strictly to their guidelines, rules and regulations in order to promote genuine democracy.