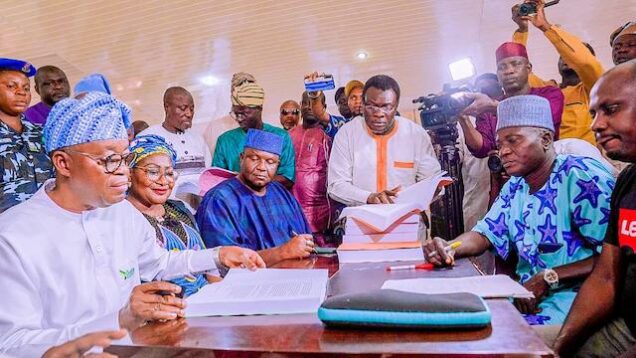 The All Progressives Congress (APC), Osun Chapter, has expressed optimism of victory in the petition filed by Governor Gboyega Oyetola challenging the result of the state poll.

Sen. Ademola Adeleke was declared the winner of the July 16 governorship election, having polled 403,271 votes against 375,027 garnered by Oyetola.

Presided over by Justice Tertsea Kumeon, the Governorship Election Petition Tribunal adjourned till Tuesday, the commencement of pre-hearing of the petition.

According to the judge, this was to allow the respondents to file their responses to the issues raised for determination

Speaking in an interview with NAN, Chief Kola Olabisi, the Special Adviser on Media to Osun APC Chairman, Gboyega Famodun, expressed optimism that the party would emerge victorious at the tribunal.

He insisted that the Supreme Court judgment which validated Adeleke as the PDP candidate for the election had nothing to do with APC’s petition.

“If they are fighting in another compound, how does that affect our compound? The Supreme Court judgment which validated Adeleke’s candidature does not concern us.

“What concerns us is our petition at the tribunal and which we are effectively preparing for,” he said.

Also speaking, the Special Adviser to the Governor on Civic Engagement, Mr Olatunbosun Oyintiloye, said members of the party were anxiously awaiting the commencement of the hearing of the petition.

Oyintiloye said contrary to the misinformation that the Supreme Court judgment had validated Adeleke’s victory, the verdict had nothing to do with Oyetola’s petition at the tribunal.

“This misinformation going around that Adeleke has won at the court should be disregarded. What was determined by the Supreme Court was whether Adeleke was the right PDP candidate during the election or not, as challenged by another party member, Dotun Babayemi.

“This is quite different from the petition filed by Gov. Oyetola at the tribunal to challenge the outcome of the July 16 governorship election due to overvoting.

“We are anxiously waiting for the proper hearing to commence on Oct. 4.

“We are optimistic by the special grace of God coupled with the grounds of the petition before the tribunal. We are sure of victory for Gov. Oyetola and APC at the tribunal,” he said.