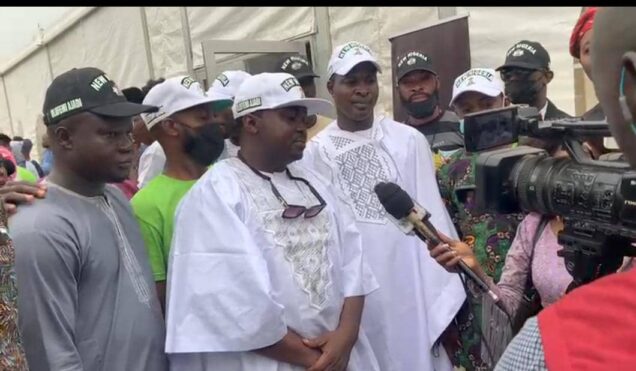 The Governorship Candidate of the New Nigeria People’s Party (NNPP) in Ogun, Olufemi Ajadi Oguntoyinbo, has joined other statesmen to felicitate Nigerians and especially the Ogun people over Nigeria’s Independence anniversary.

Thanking God on behalf of the generality of the people for life, Ajadi prayed to God to use capable citizens to lift the state and its people to their desired positions.

Speaking via a goodwill message he released to commemorate the country’s 62nd independence anniversary, Ajadi bemoaned the challenging economy and its negative effect on the people.

He said the fault was neither that of God nor the Ogun electorate, but successive leaderships in the state and beyond, who have repeatedly failed to harness God’-given resources to lift His people.

He said even a casual observation would show that God had given the country including Ogun enough resources, but lamented that these resources were not being harnessed for the public good.

He said rather than eat and be satisfied, that the people were now wallowing in lack, with many people going into crime due to inability to cope with the challenges.

“It is for these reasons that we urge our people to vote wisely in the forthcoming elections, so that life can be better for them”

“To vote casually or carelessly, would be permitting incompetence in the governance of our state and country, and promoting suffering”, he said.

Ajadi recalled the past when October 1st provided a great opportunity for school children to march about with Nigerian flags and bright uniforms, saying this was no longer the case.

“How many parents can release their children now for the October 1 March pasts at selected schools and towns outside their areas?

“Very few, because life is no longer secure in our country. It is bad and calls for good governance at the various levels”, he said.

He also reckoned with the fact that many teachers could no longer guarantee the safety of the children under their care, because they too have not been well taken care of, in terms of regular and improved pay and other welfare provisions.

“The New Nigeria people’s Party is on the ground to make Nigeria and Ogun State better again, by not only improving the standard of living of our people but by also using that to fight insecurity.

“As I wish Nigerians generally, and Ogun people happy independence, I also urge them to open their eyes and support the party and candidates that could bring back the good old days.

“I assure you, that party is NNPP.