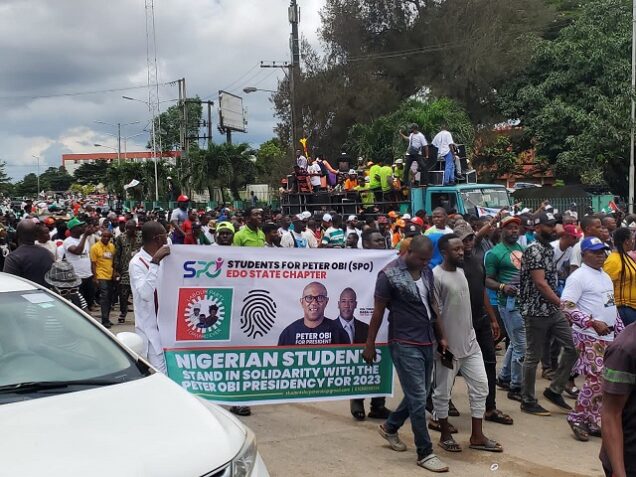 Supporters of Peter Obi in Edo State, on Saturday took advantage of Nigeria’s 62nd independent anniversary commemoration to rally support for the presidential hopeful on the the platform of the Labour Party (LP), in the 2023 General election.

Tagged “Obidient Movement”, the loyalists who numbered several thousands, including the senior citizens, marched from different routes across Benin City, the State capital, and finally converged at the city center, otherwise known as Ring Road.

They defied operatives of the various security agencies, who had hindered movements within Benin metropolis.

They said that they decided to use October 1 to drum support for Peter Obi’s candidacy, who, according to them, was capable of liberating Nigerians from the chains of poverty, rising unemployment level and dwindling educational quality.

They chanted pro-democracy songs and unanimously said they will become the “structure” to catapult Peter Obi to Nigeria’s seat of power, even as they pleaded with Nigerians in other states to join the movement in reclaiming the country.

Speaking on their behalf, Osabuohien Nosakhare said: “We don’t have structure, but you can see for yourself that we have what it takes to boost Obi’s voting numbers. We are here for good governance to support the Obi movement and this is how we want to create awareness.

“What can we show as a country at 62? No electricity, unemployment is on the increase, there is bad health facilities, pensioners can’t even enjoy their entitlements and benefits. What about the poor infrastructure? All I can say is Nigeria is in a mess,” he added.

Also speaking, the State deputy chairman of Labour Party, Patrick Ogiefa, said that the movement is not for pecuniary gains but a rally for enlightening the masses on good leadership and how the dividends of democracy can be delivered to the citizenry.

“A time comes in the life of every nation. We are now awake to rescue Nigeria. This call is divine and blessed by God so we can change the narrative. Where are we?

“We are supposed to be the giant of Africa but it’s a shame we can’t boast of our status. We have prayed and God has answered, it is now in our hands to rescue this nation. This is a moving train,” Ogiefa said.