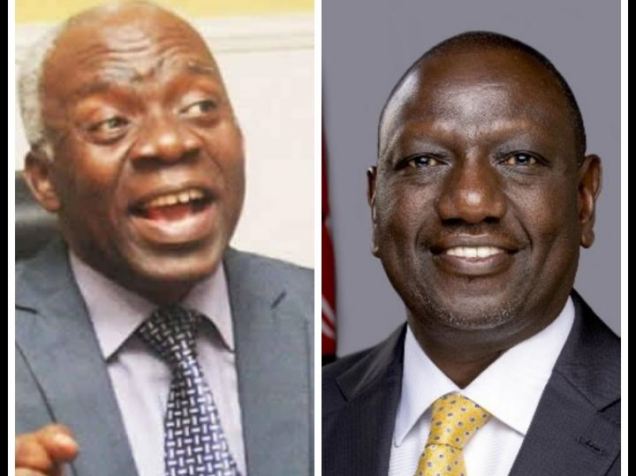 His Excellency William Ruto, Kenya’s newly minted President, prides himself as the Hustler-in-Chief of the country. He says he is from the “Hustler Nation” – the informal economy where he used to sell chickens for survival.

However, having a dog-eat-dog street ideology as he claims, does not preclude a sense of basic human decency. It is indecent and completely un-African for a man to invite a brother to a ceremony with the latter traveling 6,090 kilometres to rejoice with him, only for the celebrant to announce to the world that the brother he invited, in his view, no longer exists!

That was what Ruto did when President Brahim Ghali of of the Sahrawi Arab Democratic Republic ,SADR, better known as Western Sahara honoured the Tuesday September 13, 2022 invitation to attend Ruto’s inauguration.

The next day, when the Moroccan Foreign Minister Nasser Bourita visited him, Ruto tweeted: “At State House in Nairobi, received a congratulatory message from His Majesty King Mohammed VI. Kenya rescinds its recognition of the SADR and initiates steps to wind down the entity’s presence in the country.”

The world was stunned because even a man high on substance would not behave that way. Shocked Kenyans were up in arms and Ruto quickly deleted his tweet. An embarrassed Kenyan Foreign Ministry two days later, issued a statement signed by its Principal Secretary, Ambassador Macharia Kamau, distancing Kenya from its new President and reiterating the country’s commitment to the African Union, AU, and the United Nations, UN, Security Council Resolution 690 of 1991 for a fair referendum in Western Sahara. It dismissed Ruto’s tweet as: “ Kenya does not conduct its foreign policy on Twitter or any other social media platforms, rather through official government documents and frameworks.”

What did the Moroccan Monarchy offer or promise Ruto? Was it part of the Western Sahara phosphate and riches it has been using to entice poor African countries and bribe the European Union, EU, until the European Court stepped in?

It is expected that the President of an African country like Kenya which so courageously fought for liberation and lost over 20,000 liberation fighters, including its symbol, Dedan Kimathi, would value freedom. That Ruto would forget the contributions of Kenya to the decolonisation of the continent and back an African country colonising a sister African country, is a betrayal.

He claims to be Kenya’s first evangelical Christian President; how come he does not seem to have heard the Biblical injunction: “Thou shall not covet your neigbour’s house…nor anything that is your neigbour’s” as Morocco is doing in Western Sahara?

So, in the first two days of his presidency, Ruto had to swallow his words, but he is likely to try again to subvert the Kenyan and African peoples.

Western Sahara was occupied by Spain in 1884 and converted into Spanish Sahara in 1934. The 21st Session of United Nations General Assembly on December 20, 1966 declared “the inalienable right of the peoples of Ifni and Spanish Sahara to self-determination”. It therefore asked Spain to conduct a referendum that would allow the Saharawi exercise their right to self-determination.

Spain on August 20, 1974 announced it was going to abide by the UN’s decision by holding the referendum. On October 16, 1975 the International Court of Justice, ICJ, based on the request by the UN, ruled that there is no legal link or territorial supremacy binding Western Sahara with either Morocco or Mauritania. Spain on November 14, 1975 decided to abandon Western Sahara, including exhuming Spanish corpses from the cemeteries.

With Spain fleeing, Western Sahara got its independence. However, on April 14, 1976, its neigbours, Morocco and Mauritania, invaded the new country and shared it. The Saharawi fought back under the POLISARIO Liberation Front. But while Mauritania later abandoned its own share of the loot, Morocco continues to hold on to it. In 1984, the Organisation African Unity, OAU, based on the recognition of most African countries, admitted Western Sahara as a full member. In reaction, Morocco left the OAU.

A contrast to President Ruto is the international lawyer, Mr Femi Falana of Nigeria, who is leading various human rights campaigns on the continent, including the right of the African peoples to freedom. A torn in the Moroccan monarchy’s flesh, he uses advocacy and the courts to advance the rights of the Saharawi people to live in a country free of foreign occupation, rights abuses and discrimination.

One of the most famous cases he was involved in was that of Western Sahara icon, Madame Aminatou Haidar, who had visited Nigeria and the United States in 2009 but was prevented from re-entering Morocco on her way home in occupied Western Sahara. Morocco which claims the Saharawi are Moroccan nationals, seized her passport and exiled her to the Canary Islands, Spain, effectively making her a stateless person.

She refused to leave the Lanzarote Airport, insisting she must be returned to Morocco and allowed travel to her beloved Western Sahara. Falana mounted a legal defence for her and as the then President of the West African Bar Association, WABA, flew out to the Canary Islands to offer Haidar who was on hunger strike, solidarity and legal services.

In a joint press conference he held with her, Falana warned that : “African lawyers cannot ignore the enormity of the crimes committed by the Moroccan authorities against Sahrawi civilians…”. The international campaigns became an embarrassment and the Moroccan Monarchy buckled and allowed Haidar return home.

At that press conference, Falana vowed to “take all necessary steps at the level of the statutory bodies of Africa and the UN, to win respect for the rights of the Sahrawi people to self-determination and also to guarantee for its activists and lawyers the freedom of movement and the peaceful expression of opinions and political beliefs.”

In September, 2022, thirteen years later, Falana fulfilled part of that vow when he successfully sued six African countries: Burkina Faso, Cote D’Ivoire, Ghana, Mali, Malawi and Tanzania at the African Court on Human and Peoples’ Rights in Arusha, Tanzania. The court, ruling in Falana’s favour held that “the Moroccan occupation of Western Sahara is a serious violation of the right to self-determination (and) all states have legal obligations to assist the Sahrawi people in the full realisation of their right to self-determination and independence.” So African countries should not have admitted Morocco into the African Union.

The African court also declared that “the presence of Moroccan forces in Western Sahara is a military occupation, which violates international law”.