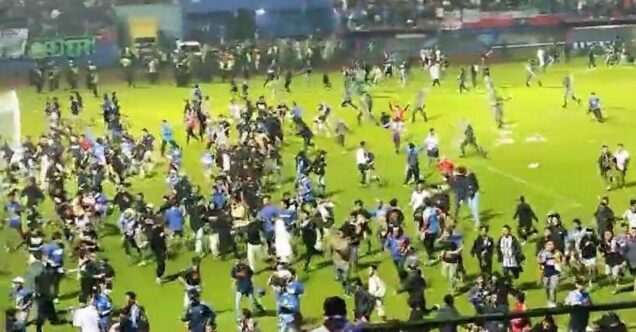 Hundreds of people ran to an exit gate in an effort to avoid the tear gas. Some suffocated in the chaos and others were trampled, killing 34 almost instantly.

More than 300 were rushed to nearby hospitals to treat injuries but many died on the way and during a treatment, Afinta said.

He said the death toll is likely still increasing, since many of about 180 injured victims’ conditions were deteriorating.

The Jakarta Post reported video footage from local news channels, which showed people rushing onto the pitch in the stadium. The footage also showed images of body bags.

The Indonesian top league BRI Liga 1 has suspended games for a week and an investigation launched, the Football Association of Indonesia (PSSI) said.

There have been previous outbreaks of trouble at matches in Indonesia, with a strong rivalry between clubs sometimes leading to violence among supporters.