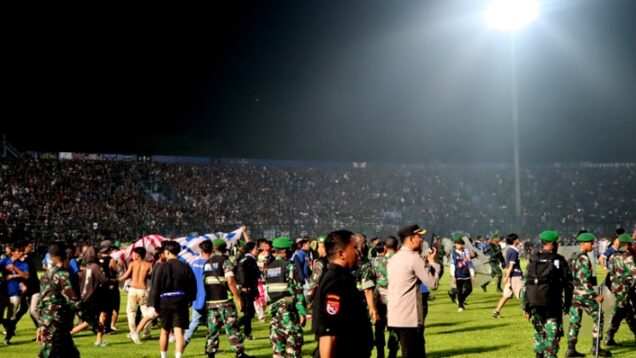 FIFA president Gianni Infantino offered his condolences on “a dark day” after at least 174 people were killed in a stampede at an Indonesian Premier League (Liga 1) match between Arema FC and Persebaya Surabaya.

Police fired tear gas in an attempt to disperse rioting fans on the pitch after hosts Arema were beaten 3-2 at the Kanjuruhan Stadium in Malang on Saturday.

East Java police chief Nico Afinta said people died after being crushed and suffocated as they ran towards the same exit, with Afinta stating that 3,000 of the approximately 40,000 spectators in attendance had invaded the pitch initiating “riots”.

It was initially reported that about 130 people had lost their lives, but officials later confirmed the death toll had climbed.

The Football Association of Indonesia (PSSI) launched an investigation into the tragedy, while FIFA’s Infantino said in a statement: “The football world is in a state of shock following the tragic incidents that have taken place in Indonesia.

“This is a dark day for all involved in football and a tragedy beyond comprehension.

“I extend my deepest condolences to the families and friends of the victims who lost their lives following this tragic incident.

All remaining Liga 1 matches due to be staged over the weekend were suspended following the tragedy, while Arema have been banned from hosting games until the end of the season.