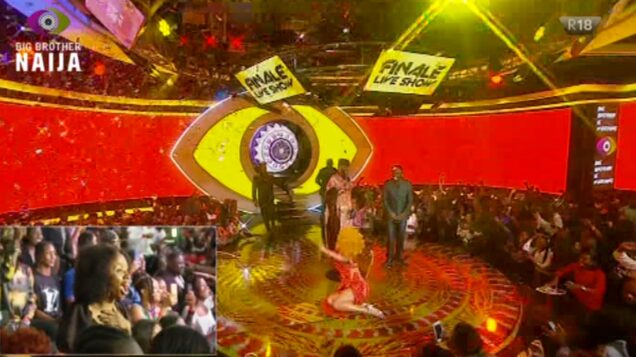 Phyna rolled on the ground in joy immediately Ebuka, the show’s host declared her the winner of the Level Up edition.

She defeated Bryann to win the coveted prize.

Earlier, four of the six housemates that made it to the final were evicted, leaving Phyna and Bryann to fight for the star prize.

It was an anxious moment as Ebuka called the two finalists out to announce the winner of the reality show.

Ebuka paused for a long time after he said ‘the winner is…” Phyna and Bryann were anxious as they waited for Ebuka to declare the winner.

And Ebuka finally said, “Phyna”, she went crazy, knelt down and then began to roll on the ground with joy.

On entering the house, Phyna had described herself as “allergic to malice”.
She is short-tempered and can fight with a person one minute, then talk to them the next, like nothing happened.
She is single and believes she is a born entertainer. “My view on relationships is: Na mumu dey fall in love”.
This 25-year-old hype girl considers herself jovial, and maintains she is allergic to gossip. “I don’t condone gossip, and a lot of people know I hate it. You can never gossip about someone to me,” she says.
One of her talents is repairing home appliances and she counts her graduation as one of the best moments of her life.
“I never thought I would be able to further my education in a higher institution of learning”. Phyna has set her sights on the Big Brother Naija House because of one simple reason; she wants to make a difference.
Tags:   BBNaija Phyna