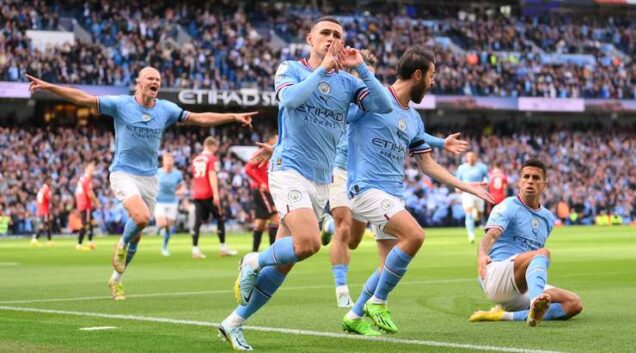 It was the Manchester derby that many had been waiting for, but City made it look easy, winning the battle in a nine-goal thriller.

Folden opened the scoring on eight minutes into the game, scoring after he was fed the ball by Bernardo Silva. He was unmarked and he buried the ball in the top of the net.

Haaland scored the second goal for City on the 34th minute after a corner from Kevin De Bruyne went into a dangerous area, finding him. He outjumped the defence and glanced a header into the back of the net.

Kevin De Bruyne teed up Haaland three minutes later inside the box and he rolled the ball into the bottom left corner and past David de Gea to get his brace.

A minute to first half, Haaland provided Foden with a nice pass inside the box. It allowed him to finish with a precise effort inside the right post, as City went into the break leading 4-0.

United pulled one back on 56th minute. Antony got to the ball and unleashed a strong shot from distance. It turned out to be a good decision as his effort found its way inside the left post.

On 65th minute, Sergio Gomez provided Haaland with a nice pass inside the box. It allowed him to finish with a strike into the middle of the goal, for his hat-trick and 5-1 for City.

Phil Foden got his hat-trick on 73rd minute to make it 6-1 for the homers after receiving a precise pass inside the box from Haaland, He beat the goalkeeper with a neat finish into the left side of the net.

Anthony Martial reduced the tally for United on 84th minute, getting to a rebound inside the six-yard box and produced a header. He managed to put the ball into the middle of the goal.

Martial got his brace for United from the penalty spot. He put the ball into the top right hand corner, giving goalkeeper Ederson no chance to make it 6-3.

It was a disastrous result for United as they never expected the bashing.