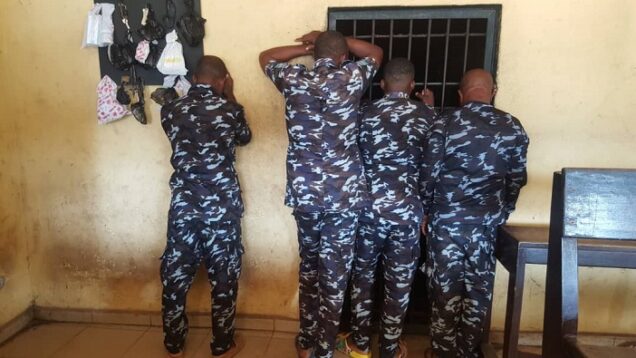 File: Some policemen arrested for a crime

The dismissal of seven senior police officers were approved at the on-going 15th plenary meeting of the Commission, Spokesman of the PSC, Mr Ikechukwu Ani said in a statement.

He added that another SP was retired in public interest while the Commission also demoted 10 officers.

The meeting, presided over by retired Justice Clara Ogunbiyi, considered all the 47 pending disciplinary matters before the commission and treated some appeals from dismissed police officers.

According to him, the Commission demoted one CSP to SP; three SPs to Deputy Superintendents of Police (DSPs); two DSPs to ASPs and four ASPs to Inspectors.

He added that 10 senior police officers, including an Assistant Commissioner of Police (ACP), one CSP, one SP and two DSPs were given the punishment of “severe reprimand’’.

He stated that Justice Ogunbiyi pledged to give desired attention to pending disciplinary matters to ensure that those found guilty were punished immediately while innocent ones were allowed to continue with their career progression.