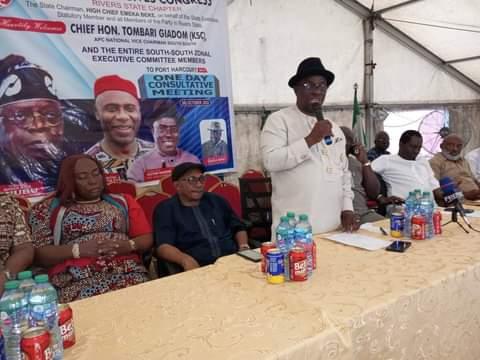 Members of All Progressives Congress, APC in Rivers State, have called on the presidential candidate of the party, Asiwaju Bola Tinubu, and governors of the South-West to stop hobnobbing with Governor Nyesom Wike.

They spoke at a one-day consultative meeting of the South-South executive committee presided over by the APC National Vice Chairman of South-south zone, Chief Victor Giadom, in Port Harcourt.

The APC members comprising National and State House of Assembly candidates and other party faithful said it was discouraging for members of the party in Rivers State to see leaders of the party that they look up to romancing with a known political opponent like Governor Wike of the Peoples Democratic Party.

They noted that the APC leaders go as far as visiting the state to inaugurate projects on the invitation of the governor, this, they stressed help to campaign for the ruling party in the state by heaping praises on him (Wike) ahead of a general election.

The state APC legal adviser, Dike Iheanyi Zubi, while speaking at the meeting said it was unfair for Governors of the South-West to hold nocturnal meetings with Wike and return back to their states without bothering to interface or speak with their party members in the state.

Zubi further said the action of Tinubu who has held meetings with Wike abroad and the action of the governors concerned were tantamount to anti-party activities and called on the President, Major General Muhammadu Buhari (retd.) to call them (Tinubu and the South-West governors) to order.

He said, “It is very discouraging for the APC here in Rivers State to see a situation where the presidential candidate of our party, Ahmed Bola Tinubu and his handlers, including South-West Governors of the APC coming to the state to undermine our party here in Rivers State.

“And they begin to hobnob and hold nocturnal meetings with Wike, who is seen as a contender with the APC here in the state.

“So, we as APC members here frown at such action because it doesn’t encourage us here. We consider it as anti-party on the side of Ahmed Tinubu and his cohorts.

“Instead of coming to strengthen the Rivers State chapter of the party, they are busy hobnobbing with Governor Wike, who is a PDP member. For the APC in Rivers State, we see it as an affront and anti-party.

“So, I call on the national chairman of the party and President Buhari to call him (Tinubu) and his cohorts to order. They should stop dividing the Rivers APC. APC is one family.”

Similarly, a former caretaker committee chairman of Obio/Akpor Local Government Area and state house of assembly candidate for the 2023 election, Prof. Lawrence Chukwu, said the action of the party leaders was embarrassing to members of the state.

“As a party, the kind of embarrassment we are receiving from our leaders who come to Rivers State is unbearable.

“Imagine that Governor Wike is abusing the President (Buhari) and our leader (Rotimi Amaechi) every day. Yet, our leaders and some governors of the party will come to Rivers State to commission projects in Rivers State.

“They will not even bother to visit members of the party before leaving. It is very bad. The APC here in Rivers State has what it takes to win elections here. All we need is support, we need financial support from the national.

“This kind of embarrassment should stop. The party must do what is right in order to win elections in the state,” Prof. Chukwu said.

On his part, the state APC chairman, Emeke Beke, who said he was speaking as an individual, expressed dismay that none of the party members from the zone whose names were submitted to the national level of the party made the list of the APC presidential campaign council.

Beke told Chief Giadom to relate it to the national level when he returns that the state APC chairmen in the zone took a position and have written to the President and the national officers in that regard, even as he called for a refund of 25 per cent from the proceeds of the sale of forms in the state.

According to Beke, “We have written to the President, to the national chairman, to the candidate (Tinubu), to the chairman of the governors’ forum and the Director General of the campaigns.

“You people asked us to nominate five, five names for campaign council. None of the five names we sent appeared on the list because they don’t like Rotimi Amaechi. From the zone, no one (names) appeared. And the chairmen have taken a position on that. We will down our tool.

“As you go back tell the national chairman that Rivers State bought forms of over one billion naira. And what we are asking, remit to the state 25 per cent of that money.

“We will vote for our national assembly state house of assembly candidates and focus on the governorship candidate of this state and we will win.

“The truth is that what has happened to Rivers State is because they don’t like Rotimi Amaechi. I speak as Emeka Beke, not as Rivers APC Chairman.

“I have heard and seen Wike’s comments on Television and social media respectively. Wike dines with leaders of our great party.

“If the national does not listen to the APC Rivers State, we will take our destiny in our hands.”

He said Governor Wike does not have the political spread to win an election, but was luring its leaders with financial inducement, even as he expressed worry that respected leaders of the party are constantly visiting the state and dining with Wike just a few months to the general poll.

He said, “We have been out of government for eight years. Now we want to win elections. I can tell you that Wike does not have the political base to win an election in Rivers State.

“What Wike is doing is giving the bride to leaders of our own party to shortchange the APC family in Rivers State.

“My candidates and members in Rivers State have suffered. Candidates are selling their land, selling their property to make sure they win an election and keep the APC in power.

“We are party men, but tell them if they don’t support us we will not support them.”

Responding, the APC national vice chairman, South-South and former acting national chairman of the party, Chief Giadom thanked the party faithful in the state for their frank comments and contributions.

“This is my own constituency and I am from Rivers State. I know exactly that everything that you have said here is true.

“Everybody in Nigeria knows that what you are complaining about is true. From the speaker (Femi Gbajabiamila), Governor Fayemi, and Governor Akeredolu, all came here (Rivers) to commission projects, and by doing it, praised Governor Wike.

“By doing that you are marketing our opponents against the APC. So we will put it to them, we will make them know.

“I can also tell you that we are passing through very tough times,” Giadom said.

Also speaking to newsmen after the meeting, he said, “The reason why we are here, is to collect what we feel are the challenges in the party, with the aim of providing solutions for them or be ready to face the consequences.

“We have come, we have listened to them, we have heard them clearly, and we are going to put them together and report to the national party in Abuja to ensure that we find solutions to all the things that we know will help us win election in Rivers State.

“I know the pains of my people, which is also our collective pain. We were not on the ballot in 2019, which of course we know that I was supposed to be a direct beneficiary of that ticket.

“But I can assure them that, by the grace of God, we will be victorious this time around and APC would win in Rivers State and recapture back our possession of becoming in charge of Rivers State leadership and we will form a government and be in government house.”