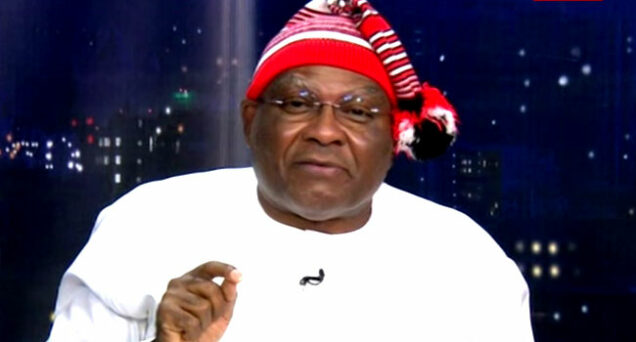 The viral news that former Governor of Enugu state and Senator, Dr Chimaroke Nnamani had forfeited $41.8million to the United States government was fake news after all.

He also openly waged a relentless war against Obi supporters on social media.

The online medium that published the malicious falsehood, gazettengr.com has deleted the story and the web links after Nnamani reacted and punctured the story.

But copycats are still running with the fake news.

In a statement, the senator described the report as a ruse. He clearly pointed accusing fingers to the Peter Obi camp for the malice.

The federal lawmaker in a statement he personally signed and made available to journalists in Abuja said the report was concocted to malign him because of his alternative views on the political development in the country.

“Campaign of calumny, intimidation, insults and abuse orchestrated to suppress and diminish my voice.

“However my voice will grow louder and more persistent. I know my recent position will attract this attack by those who cannot tolerate alternative views. Democracy allows alternative viewpoints.

“If I cannot express my opinion and take a stand who will?

“There was no such judgement anywhere. The author of the fake news is a known blackmailer. I’m not surprised that he has offered himself as a willing tool for this hatchet job once again.

“I left Enugu state on a solid foundation 15 years ago. Records of our accomplishments is an open book. No amount of mudslinging can rewrite our history.

“I urge our people and Nigerians alike to ignore the mischievous report sponsored by political foes and professional blackmailers,” he said.

According to the fictional report by gazettengr.com, which was copied by Sahara Reporters, Nnamani was accused of stealing $41.8million from Enugu treasury while he was governor between 1999 and 2007.

The online medium claimed Nnamani used the stolen fund to acquire assets in the U.S. which had now been forfeited, following a forfeiture proceeding by the FBI.

The fake report claimed a Judge Williams Acker of the United States District Court for the Northern District of Alabama made the forfeiture order.

But it was all fake news. There was no such report by the Department of Justice in the Northern District of Alabama.