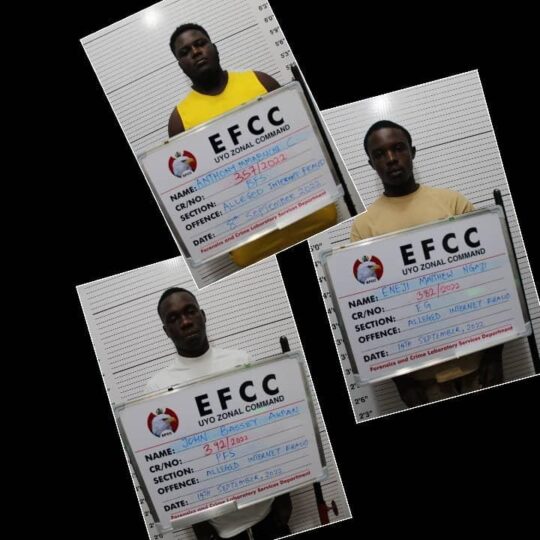 They were all convicted after pleading guilty to the one-count separate charge, when arraigned by the Uyo Zonal Command of the Economic and Financial Crimes Commission, EFCC.

The charge against Ngaji reads:

“That you, Eneji Matthew Ngaji ( a.k.a Kayden Malachovski, Glen Benham) sometime in 2022 in Nigeria within the jurisdiction of this Honourable Court with intent to obtain property and gain advantage for yourself, fraudulently presented yourself as Kayden Malachovski, Glen Benham on Telegram and obtained the sum of Ninety Dollars ($90) from Nellie Yambo, Lorie Rodriguez respectively and thereby committed an offence contrary to Section 22 (2) (b) (i) & (ii) of the Cybercrimes (Prohibition, Prevention E.T.C) Act 2015 and punishable under Section 22 (b) (iv) of the same Act”.

The charge against Akanimoh reads:

“That you, Louis Samuel Akanimoh “M” sometime in 2022 within the jurisdiction of this Honourable court did fraudulently impersonate Daniel Dailey and Fernando Luis on WhatsApp with intent to gain advantage for yourself and thereby committed an offence contrary to Section 22 (2) (b) (i) of the Cybercrimes (Prohibition, Prevention) Act 2015 and punishable under Section 22 (3) of the same section”.

In view of their guilty pleas, EFCC counsel, S. I. Yaryasa prayed the court to convict and sentence them as charged. However, defense counsels, Cyprian Afahanam and M. I. Osimen prayed the court for leniency in sentencing the defendants.

Justice Ojukwu convicted and sentenced Chinaemerem and Akpan to six months imprisonment each, with an option of a fine of N500, 000 ( Five Hundred Thousand Naira) each. Ngaji was convicted and sentenced to five months imprisonment, with an option of fine of N500,000. He was ordered to restitute the sum of $90( Ninety United States Dollars) to his victim through the EFCC.

All three convicts forfeited all instruments used in committing their crimes to the Federal Government. Additionally, they were ordered to sign an undertaking to be of good behavior henceforth.

Justice Okeke convicted and sentenced Akanimoh and Ibekwe to two months and two years jail terms respectively, without an option of fine.

Ibekwe was ordered to restitute the sum of N1.2million( One Million, Two Hundred Thousand Naira only) to his victims through the EFCC and Akanimoh to restitute $460( Four Hundred and Sixty United States Dollars) to his victims. They also forfeited their phones to the government.

The convicts made their ways into the Correctional Centres, when they were arrested by operatives of the Uyo Zonal Command of the EFCC, for internet-related offences. Some of them were found to be impersonating foreigners to defraud their victims. They were subsequently prosecuted and convicted.