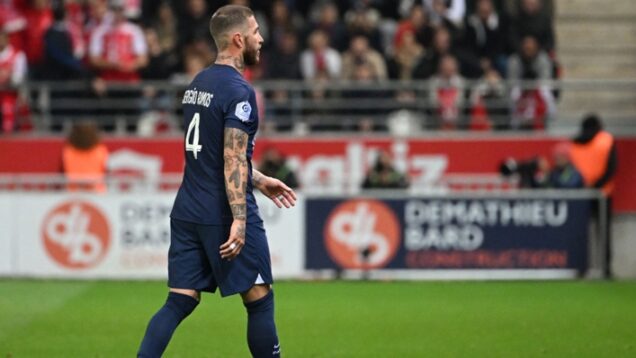 Paris Saint-Germain boss Christophe Galtier confirmed a common Spanish insult was the cause of Sergio Ramos’ bizarre red card against Reims, as he claimed referee Pierre Gaillouste failed to control the contest.

Ligue 1 leaders PSG dropped points for just the second time this season on Saturday after a 0-0 draw at Reims, failing to make the breakthrough against their struggling hosts after Ramos’ red card.

Ramos received two yellow cards in less than a minute shortly before the break, having remonstrated strongly with the referee after tripping Marshall Munetsi.

The Spaniard’s dismissal was the 21st of his league career (in LaLiga and Ligue 1) – at least seven more than any other defender in Europe’s top five leagues has received this century.

Speaking after the draw, which leaves PSG three points clear of Marseille at the summit, Galtier stressed his belief that Ramos did not mean to offend Gaillouste.

“I know Sergio Ramos very well, I’m not sure that the insult that came out was directed at the referee,” Galtier said.

“It’s an insult that you hear all the time on a training ground, that you hear a lot in Spain. The referee took it from him and kicked him out, I’m not going back [to speak] on that.”

PSG faced 24 shots against Reims, the most they have had to contend with in a Ligue 1 match since December 2011 (against Saint Etienne), and Galtier was unhappy with their performance.

“There was a lot of nervousness that I can’t explain, on both sides,” Galtier added. “There were a lot of duels, clashes, neither of the two teams mastered the events.

“None of the three parties, the teams, and the referee, did control this game and there was a lot of nervousness.”

Gaillouste has handed out six red cards in the six Ligue 1 and Ligue 2 matches he has refereed this season (four in Metz v Guingamp, one in Nantes v PSG, and one in this match).

Although Galtier disagreed with the decision to send Ramos off, he was equally irritated by the “stupid” nature of his red card, particularly given Ramos will now miss a meeting with Marseille next week.