How thieves have been tapping Nigeria's oil for 9 years 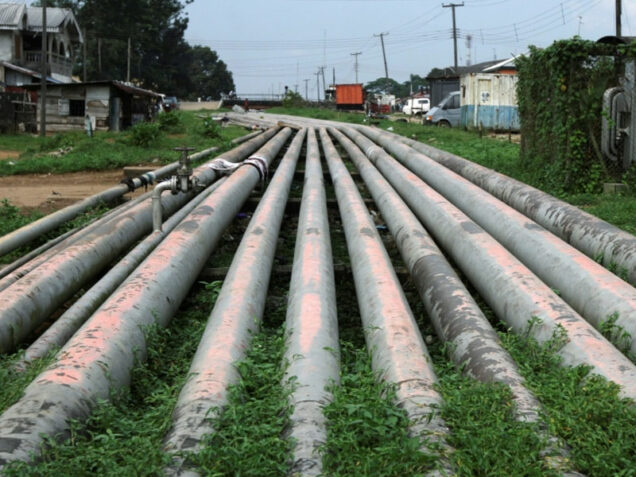 The sophisticated operation had been going on for nine solid years before it was discovered by security operatives. Stealing of oil in open badges or surface pipeline is what is generally known. But a system that smacks of heart bypass surgery whereby oil thieves pass a 4-km pipe underwater to connect the high seas is an altogether kettle of fish.

When the Group Chief Executive Officer of the Nigerian National Petroleum Company Limited (NNPC), Mallam Mele Kyari, held a meeting with the Nigerian senate, he narrated how the four-kilometre or 2.5-mile connection from the Forcados export terminal, which typically exports around 250,000 barrels per day (bpd) of oil, into the sea was found during a clampdown on theft in the past six weeks.

In his words: “Oil theft in the country has been going on for over 22 years but the dimension and rate it assumed in recent times is unprecedented,” Kyari told the lawmakers.
“But in rising to the highly disturbing challenge, NNPC has in recent times in collaboration with relevant security agencies clamped down on the economic saboteurs.
“In the course of the clampdown within the last six weeks, 395 illegal refineries have been deactivated, 274 reservoirs destroyed, 1,561 metal tanks destroyed, 49 trucks seized.
“The most striking of all is the four-kilometre illegal oil connection line from Forcados Terminal into the sea which had been in operation undetected for nine solid years,” he added.”

Forcados is operated by the Shell Petroleum Development Company (SPDC), a local subsidiary of Shell.

Hot-tapping and cold-tapping are, according to experts, extremely sophisticated methods of oil theft and are primarily used in large-scale operations during the crude oil stage. Terminal and vehicle transportation theft involve the re-appropriation of both crude and refined oil products from storage facilities during the process of export transportation.

During the process of hot-tapping, an illegal secondary pipeline belonging to oil theft criminals is attached to a high-pressure primary pipeline belonging to a multinational corporation. This is a practice in Mexico. According to a report by theglobeandmail.com, “Mexico’s warring drug cartels have long freelanced in criminal activities that range from smuggling migrants to assassinating public figures and extorting Christmas bonuses from school teachers. Their latest pursuit is even more audacious: taking on Petróleos Mexicanos, the state-owned oil company better known as Pemex.”

In an essay, “Downstream Oil Theft: Global Modalities, Trends, and Remedies”, Ralby Ian argued that after this breach is successful, oil is diverted from the primary pipeline into mobile oil bunkering facilities that are attached to the secondary pipeline. By gradually withdrawing small amounts of oil, the primary pipeline can function at almost normal pressure and can remain undetected by oil corporation officials. Although a gradual amount must be withdrawn, the pressure within a pipeline is substantial enough for a transport barge to be filled with thousands of metric tons of oil within a few hours. Hot tapping is considered to be extremely dangerous and complex.

In the process of cold-tapping, a portion of a pipeline is blown up and a second pipeline is attached to the shut-down primary pipeline. After the primary pipeline is repaired, the existence of the secondary pipeline’s access to the oil flow is unknown since the overall pipeline pressure will not fluctuate. Cold tapping is considered to be less dangerous.

Although oil theft is common during the initial stages of the oil production process, theft is rampant at the port terminals where crude and refined oil products await shipment to international locations and during the transportation of oil products from corporate facilities. In export terminal theft, administrative collusion and security force corruption facilitate the siphoning of oil shipment reserves into criminal fuel trucks. In turn, these fuel trucks are used to transport illegal oil products for sale in neighbouring African countries where the oil price is substantially higher than the subsidized rates in Nigeria. Since oil corporations do not have oil meters at the source of production and since they are only present at export facilities, there is a lack of oversight in managing the initial value of oil that was produced by the multinational oil corporations.