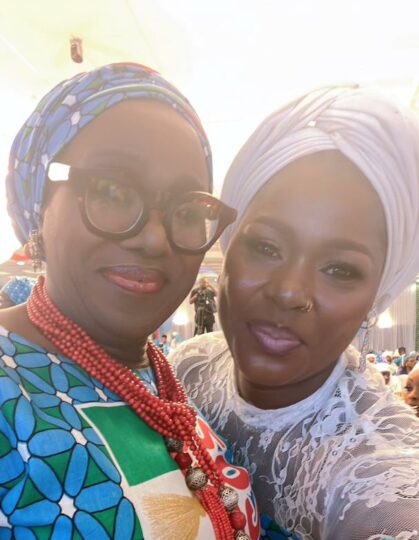 Nollywood actress Joke Silva ignored her critics as she attended the inauguration ceremony of the APC Women Presidential Campaign Council in Abuja.

The inauguration took place at the Aso Villa Banquet Hall on Monday.

Silva, who is a member of the women’s presidential campaign council, was captured wearing an outfit with an APC inscription.

Her attendance at the inauguration came a few days after she was bullied online for attending a rally for Bola Tinubu.

The online attack began after the actress posted pictures and videos of herself with the Lagos State First Lady, Ibijoke Sanwo-Olu, and others dancing and waving brooms, APC’s symbol.

According to a report, the attacks came from supporters of Peter Obi.

One of her attackers wrote: “I’m really happy Joke Silva closed her comments and other Tinubu supporters are in the closet and afraid to publicly support him/APC. This means we’re getting somewhere.

“There is shame in supporting greed, wickedness, and failure, and I’m happy they recognize this.”

Another attacker wrote: “Joke Silva has pitched her tenth with Bola Ahmed Tinubu. At 61, she has nothing to lose. All she wants is retirement benefits and Nollywood can’t give her that. Mama is old and she may not be looking forward to achieving anything spectacular. It is what it is.”

However, despite all the criticisms, Joke Silva went all out today for her preferred presidential candidate, Bola Tinubu.