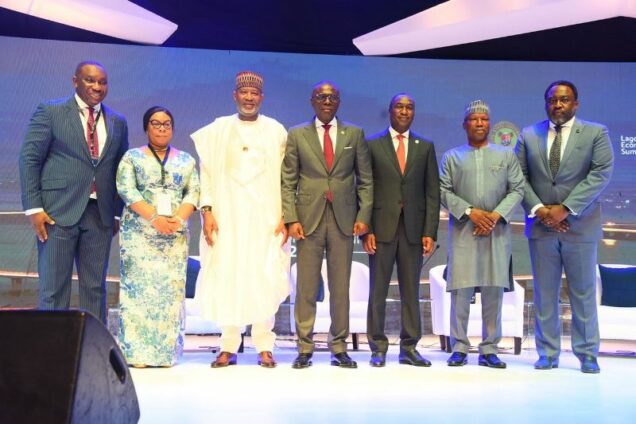 The two-day event taking place at the Eko Hotel and Suits is being attended by stakeholders in and outside of Lagos – citizens, businesses, governments, regulators, civil society, technocrats, academics, funders, donor community, and international partners – to exchange ideas, address potential developmental roadblocks and chart a path forward towards accelerating sustainable economic growth in Lagos State.

Speaking at the opening ceremony, the governor said since its launched in 2000, the Summit, hosted by Lagos State,
had served as a veritable convening platform for the best and brightest stakeholders and ideas focused on the development of Lagos.

“Over the next 2 days, we will listen to policy-makers, thought leaders, futurists, disruptors, innovators, investors, economists, among others, all united by an abiding focus on the development trajectory of Lagos State.

“They will share insights and offer perspectives on Lagos’ pathways to the future, most especially the solutions that can be readily implemented within the context of our unique circumstances. Indeed, that emphasis on ‘home-grown’ and localized solutions is a very important one.

“We cannot, at this time, still be caught up in the myth of mindless copying and pasting, from around the world. Yes, we must emulate and look outside for inspiration, but all of this must be done on the foundation of deep local context and adaptation.

“As the race to the future intensifies, global cities increasingly play a critical role defining their nation’s progress and prosperity. According to the World Bank, 56% of the world’s population currently live in cities, and this is expected to rise to almost 70% by 2050.

“In addition, eighty percent (80%) of global GDP is currently generated in cities. Lagos is a prime manifestation of this –with a GDP that’s higher than the GDPs of all, but five or six African countries. Around the world, cities are facing a combination of threats and opportunities that are amplified by globalization, technology, climate change, and even global pandemics like Covid-19,” he said.

The governor stated that in the several months leading up to this event, his government had made concerted efforts towards the conceptualization and development of a comprehensive 30-year plan, the Lagos State Development Plan (LSDP) 2052, with the ambition of transforming Lagos into Africa’s Model Mega City.

He said the LSDP 2052 plan is built around 4 strategic pillars – Thriving Economy, Human-centric City, Modern Infrastructure & Effective Governance – and focused on 20 strategic areas that would drive this ambition.

“This long-term development plan has been meticulously devised to accommodate the best of all existing and prior high-level policy documents, transformation plans and development policies, including the THEMES Agenda. In line with the ongoing work to finetune the Lagos State Development Plan 2052, the focus of this year’s Ehingbeti Summit will be on the long-term sustainable socio-economic development of Lagos State.

“The implementation of this Development Plan requires purposeful and dedicated leadership. And our unwavering
promise to you, as a State Government, is that we will provide the required leadership, to move from ideation to
action, and to transform Lagos from Megacity to Model Megacity.

“As we look forward, Lagos State will continue to achieve its potential, which will be built on our resilience, our rich heritage of culture, innovation and entrepreneurship, and most importantly, our people. I am excited by what the LSDP 2052 has to offer our great State,” he added.

Lagos Commissioner for Economic Planning and Budget, Sam Egube, informed that of the 222 resolutions reached at the past eight editions of Ehingbeti, the government had implemented 95 percent, which is 210 of them.

He said Lagos is not progressing by luck or accident, but evolving through the rigours of conversations and exchanges of ideas coming from platforms like Ehingbeti and the commitment of successive governments of Lagos to commit to the execution of resolutions reached at the summits.

Egube charged participants at the summit to focus on not only on the short term challenges, but on the long term view also, saying that “we should observe, acknowledge and admire the progress we are making and not just the drawback we may be experiencing from time to time; we should accept that we have assets and advantages that we can be proud of and leverage on.”

Chairperson of the Summit, Mary Iwelumo of Price waterhouse Coopers (PwC), said the focus of this year’s Ehingbeti is achieving consensus on the path to sustainable socio-economic development.

“Specifically, it is the intention of the Economic Summit Group to introduce and officially the Lagos State Development Plan 2052,” she said, saying that the plan is expected to play an integral part in galvanising the vibrancy of Lagosians, aspiring Lagosians and sustaining the state’s growth trajectory for the next 30 years.

“So over the next two days, we will listen to and engage with high-powered speakers, thought leaders and exemplary individuals on critical issues and solutions relevant to the socio-economic development in Lagos hinged on the various dimensions and focus areas of the plan,” she said.