What FG should do with Nnamdi Kanu - Falana 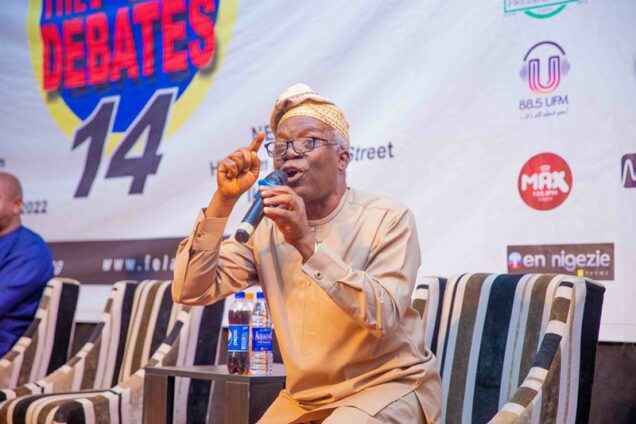 Femi Falana SAN while making his contribution at the 14th edition of Fela Debates held in Lagos. Photo: Efunla Ayodele

Human rights lawyer, Femi Falana, SAN, has advised the government to sit down with the leader of the Indigenous People of Biafra, IPOB, Nnamdi Kanu and negotiate with him rather than carry on with his trial.

Falana made this assertion while responding to a question from the audience at the 14th edition of Fela Debates which was held on Monday 10 October at NECA House in Ikeja, Lagos.

The theme of the interactive session was: ‘Election 2023: Action Time.’ The event was moderated by ace broadcaster Edmund Obilo.

The Fela Debates, which was well-attended was organized as part of activities lined up to mark this year’s Felabration, an annual week-long festival organized to celebrate the life and works of the legendary Afrobeat King, Fela Anikulapo Kuti. The theme of this year’s celebration is: ‘Fear Not Man.’

The highly respected lawyer said the government should opt for negotiation with the detained IPOB leader because the trial cannot be concluded.

He also said the government is not competent to try him, citing the case involving the publisher of Sahara Reporters, Omoyele Sowore, whom the government arrested and charged with treasonable felony in 2019 and till now has not been concluded because the government kept adjoining the case.

“The trial cannot be concluded. The government cannot try him (Nnamdi Kanu). I know the government is not competent to try him. Sowore was charged with treasonable felony in 2019. After we took the first witness, the government couldn’t go on. So, the government has been adjoining the case and that is the problem with politically motivated cases.

“What the government should do is to sit down with all aggrieved people in the country and negotiate. If you are negotiating with terrorists, why can you not sit down with Nnamdi Kanu and others? If Nigerians want to build a country, it must be on a platform of justice and fair play. Everyone must be treated equally,” he maintained.

Falana went further to say Nigerians got it wrong when they thought about the developmental challenges the country is facing is premised on ethnicity.

According to him, those who loot the country did not belong to a certain ethnic group as they cut across the various ethnic groups in the country and were united by a common inclination to loot.

According to him, those who loot the country’s treasury belonged to a certain class whose common denominator was to corruptly enrich themselves at the expense of the masses.

“I think we are all getting it wrong. This business of Yoruba, Hausa, and Igbo. Please let’s learn from Fela. Fela wasn’t bothered by all these irredentist demands. Fela’s own was on a class basis. When he was speaking about authority stealing, warning all of us in the 70s that a group of people have devised their language for looting.

“And for those of us who were lawyers, we were like what is this guy talking about? Fela said a common man has stolen something at the bus stop, and out of confusion, the ordinary people too would shout ‘ole ole’ and put a tyre on his neck and burn him. We are still going on with that kind of mob justice in Nigeria today. But according to Fela, turn your side to the other side. Criminals will steal billions with a pen. Fela said ‘Pen get power gun no get. And Fela was not talking of Yoruba, Igbo and Hausa. He said all these crimes in alliance with imperialism, ITT, all of them, were working hand in hand to pauperise the African people,” he said.

In his speech, Baba-Ahmed bemoaned the tendency of Nigerians to concentrate on the presidential candidates, on who among them would win the 2023 presidential election rather than focus on the survival of the country and its future.

Baba-Ahmed buttressed his point by asking a young boy he called from the audience to stand with him on stage referring to the young lad as the future of the country.

He said: “This is our future. The question we need to ask ourselves is: Are we doing justice to him and his generation? This is my grandchild. This is our grandchild. This is what we should talk about when we think about Nigeria. What will his life be like in 25 years? Will he still be a Nigerian? Will he be in a part of Nigeria that used to be Nigeria? Will he be better? Will he have a job? Will he have an education?

“It is not about us. And this is the lesson that we should take. So don’t think the elections of 2023 are about who becomes president. And this is the point. It is about whether Nigeria survives. Not just survive, can it make a U-turn?”

Baba-Ahmed said as Nigeria inched towards the 2023 elections, the onus is on Nigerians to interrogate the presidential candidates.

He also said Nigerians should be wary of the kind of voices that people hear and listen to, citing the Southeast as an example, where the only voices people hear were those from the streets.

“Who decides what happens on the streets in the Southeast? Who decides whose voices we hear,” Baba-Ahmed asked.

Kadaria Ahmed, on her part, said Nigerians had over the years been revolving around identity politics.

“I’m here to talk about elections. And to be honest with you, while I am hopeful about Nigeria, I keep worrying that we keep having the wrong conversations. In every forum, we go through this circle of hope and despair. We have our hopes up that this election is going to give us this messiah that is going to come and solve our problems without looking at the fundamentals of the problem that we face.

“Unity of purpose and identity politics are the scourge of this country as if identity politics is going to take us to Nirvana, Pre and post-independence we were Yoruba, Igbo and Hausa. And 60 years on, the politics has not changed. Because we do identity politics we have managed to snatch defeat from the jaws of victory.

“Why do I say this? We have everything that we need to build a nation. Today we are still a country. And even that is becoming only a name. We have successfully built a place where a tiny percentage of the people make and drive policy based on how much money it would put into private pockets, not the public.

“And let me tell you, it is deliberate. There is nothing accidental about identity politics. It is that same divide and rule that the British used effectively that is being used against us. I find it shocking that we continue to fall for it. Even among the most educated among us, the language now, the discourse, the conversation revolves around Muslim, Christian, Hausa/Fulani. Yoruba, Igbo. Why are we so stupid? If it was going to work it would have worked. We’ve been doing this for 60 years. It hasn’t given us the country that we want. Is it time to start thinking differently?

“And so these elections are important because they could symbolize the turning point. But what I am saying is that there are fundamentals that need to change. Otherwise, in four years we are going to be here again, looking for another messiah. They don’t exist. What you have are people who should be prepared to hold the people they put into positions of authority accountable regardless of where they come from.

“So, in talking to people who want to become president please can we focus on asking the questions that will help us determine whether they would have the political will to allow us the things that we need to do to make this country work? She asked.

Moghalu, like the earlier speakers, also gave a brilliant speech as he shared their views about identity politics. According to him, Nigerians are not as divided as they think they are.

“What has happened is that we lack unifying leadership. In 2023 we should be looking for a leader that will regain or rediscover the task of unifying this country and give it a unity of purpose.

“Despite the diversity of ethnicity or religion, it is possible for Nigerians to be united. There is something that rises above all the things that divide us. That is what builds great nations. And it is called Worldview. Every successful country has a worldview, a philosophical foundation that drives it,” Moghalu averred.