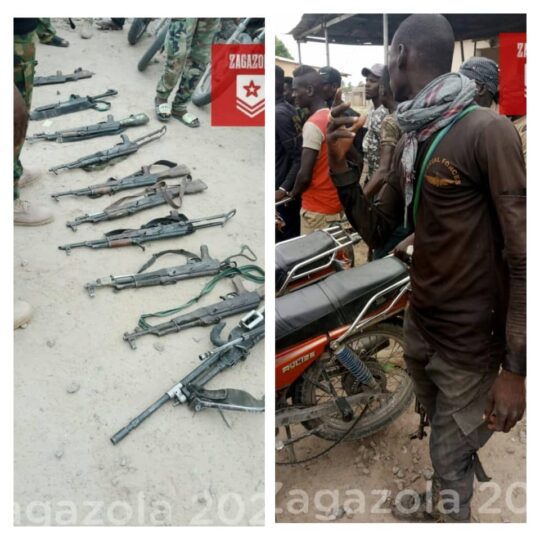 By Zagazola Makama
At least 19 Islamic State of the West African Province (ISWAP) fighters have been killed in a fierce battle with troops of Operation HADIN KAI in the North East of Gamboru Ngala, Borno State.
Gamboru, a border town  is approximately 80 Miles respectively and 128km to the restive capital of Maiduguri.
It was gathered that the troops, backed by a column of Civilian Joint Task Force (CJTF), achieved the feat on October 11, after they thwarted an ambush staged by the terrorists against the troops during a fighting patrol.
An Intelligence source told Zagazola Makama, a Counter Insurgency Expert and Security Analyst in the Lake Chad, that the terrorists who came in a very large numbers on motorcycles and hilux trucks mounted with guns, began the attack with  heavy gunfire against the troops.
The Intelligence sources said that the highly spirited troops were right on hand to counter the audacious ambush which triggered a heavy gun-battle which lasted for about 40 minutes.
He said that the troops later overwhelmed the terrorists with superior firepower and inflicted humiliating defeat on them, forcing them to  abandoned their mission and took to their heels.
“The troops, however  chased the retreating terrorists and killed 19 of them in the process.
The Troops successfully captured one of their gun truck after killing all its occupant, recovered  9 motorcycles as well as  multiple weapons, including one PKT, 9 AK-47 rifles and many rounds of ammunition.
“No fatalities was recorded on the side of troops only two injured on our side,” he said.
Zagazola reports that there was wide celebration by the troops and the civilian Joint Task Force following the success in the attack in the town of Gamborun Ngala.
Tags:   ISWAP   Nigerian troops