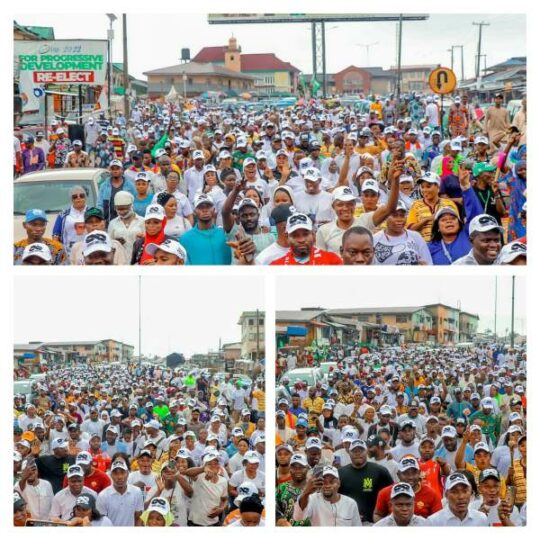 The presidential ambition of the APC’s candidate, Asiwaju Bola Tinubu received a boost on Thursday as massive crowd staged a walk for him in Osun State.

Thousands of supporters walked the boulevards of Osogbo, Osun State in solidarity with Tinubu and Shettima for the Presidency.

There was massive gridlock in several roads in Osogbo, as supporters were seen chanting the praises of Tinubu, while many held flags with the photos of the APC’s candidate embedded in them.

The APC youths defied the heavy downpour in Osun to stage the rally.

The rain started before the take-off at Ayetoro which delayed the 9.00am scheduled for the walk, tagged, One Million Osun Youths March for Tinubu/Shettima.

But the teeming youths moved into the rain and continued with their solidarity march to the campaign office, where the State Governor, Adegboyega Oyetola addressed them under a shield.

Oyetola told them that the government of Asiwaju Tinubu would be a government of the youth, saying he is here to serve Nigerians.

According to him, Tinubu has plans for education, agriculture, infrastructure, social development and many more, adding that they would be surprised the way he would tackle insecurity.