Gov. Wike under fire, accused of unleashing thugs on Rivers 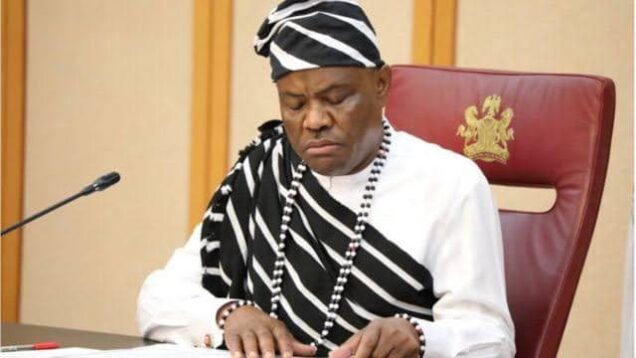 Governor Nyesom Wike has been heavily criticized over his recent rash of massive appointments of ‘advisers and liaison officers’ without any clear-cut defined responsibilities.

A sociopolitical group, the One-on-One-Network, in its analysis of Wike’s action, warned that the campaigns for the 2023 election in Rivers will be characterized by violence.

However, One-on-One-Network said the appointment of 14,000 political advisers was ‘a subterfuge towards weaponizing and unleashing political violence in Rivers State ahead of the 2023 general elections.’

The Director-General of the group, Comrade LoveGod Nweze, claimed that the appointment of the over 14,000 political advisers is part of a larger plan and in furtherance of last week’s pronouncement of Executive Order 21 by the Governor which has already set up a chain of condemnable activities to emasculate and strangulate perceived political opponents.

The group urged President Muhammadu Buhari, the Independent National Electoral Commission, INEC, international communities, civil society organizations, and others to call the Rivers State Governor to order so as not to set the state ablaze.

Nweze further appealed to security and law enforcement agencies not to allow Wike to compromise them by using them as tools and agents for a political witch hunt.

He also urged security operatives to beam their searchlights on this ”wave of banditry and merchants of violence disguised as 14,319 recruits being primed to be unleashed on the political landscape.’

The group said the appointments were part of the ‘rascality and abuse of office’ being exhibited by Governor Wike in Rivers ahead of the 2023 election.

The group noted that Wike had first introduced executive order 21 in which he ordered political parties to ‘get near-impossible government approvals for political activities, after paying as high as a non-refundable five million naira per activity.

One-on-One-Network recalled that Wike contested to be Governor and he was not prevented from using any of the State-owned facilities for his political activities and engagements under the administration of Gov. Rotimi Amaechi.

The group said: “Also, yesterday’s appointment of over 14, 000 persons by the Governor is another illustration that the Governor intention is a subterfuge towards unleashing political violence in Rivers State ahead of the 2023 general elections.

“We have it from source that these persons are well-known cultists and thugs. Also, why will the governor be desperate to bring further opprobrium to the state by wasting scarce resources on frivolities when our parents are still being owed, denied their pensions and gratuities and our various communities are yearnings for developments? A larger part of our state have been submerged by floods, the Governor has not deem it necessary to intervene but rather focused on clout chasing, unleashing violence and other inanities.

“A conservative monthly payment analysis of N200,000 each to the 14,459 appointed persons will set the state back to a tune of over two billion naira monthly and add it to other operational cost such as transportation and others, over four billion naira will have gone down the drain from the state coffers.

“Already, Wike’s penchant for constricting the political space by obnoxiously narrowing mobility and visibility of intra and inter-party opposition and dissenting voices has been clearly established thereby necessitating the urgency of appropriate authorities and accountability groups to rein him in before he turns Rivers State into a cauldron of violence and insecurity as we build down to the general elections.

“This is quite reprehensible and requires the urgent intervention of President Muhammadu Buhari, civil society organizations, and international groups. This is unbecoming in Rivers State, where a Governor will be using our commonwealth to weaponize political violence.

“Not even President Buhari, who has wider and larger jurisdictions as President, has appointed that number of persons in one fell swoop. In fact, it has never happened in the history of the country be it State or national,” a part of the statement reads.