If I expose Ayu, his children will disown him: Wike blows hot again (video) 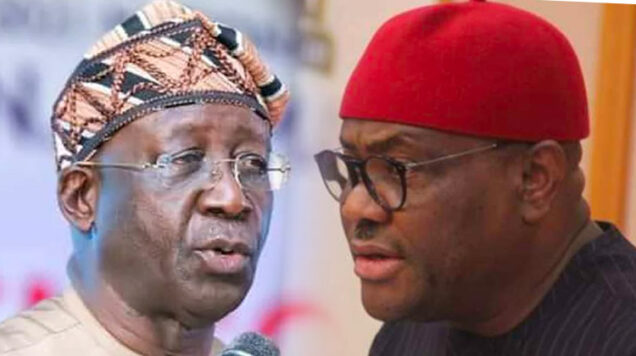 Governor Nyesom Wike said the children of Iyorchia Ayu will disown him if he exposes the corrupt activities of the National Chairman of the PDP.

Wike made the statement in a live chat with newsmen in PortHarcourt on Friday.

The Rivers Governor said Ayu lacks integrity and cannot lead PDP to victory with such attributes.

Wike further claimed that Ayu collected a N100 million bribe from a governor in addition to the N1 billion bribe he collected from a presidential aspirant in Lagos.

He dared Ayu to deny the allegation, saying he will reveal the governor if the PDP chairman claims ignorance.

Wike also vowed that he will not back down until Ayu is out of the chairmanship position.

He said: “This is someone that told us if the presidential candidate comes from his area he will step down and we are saying do what you have told us. It is simple.”

Wike also confirmed during the interview that he will jack up the number of Special Assistants on Political Units to 100,000.

Despite wide criticism of the appointment, speaking on Friday, Wike said: “I authoritatively confirm to you that it will be increased to 100,000.”

The governor said he will be the judge to determine whether the salaries of the appointees will be a burden on the Rivers State treasury.

When asked how much the appointees will be paid, Wike said: “How is that your business? when we pay them you will know.”

He noted that civil servants will also be employed before he leaves office.

According to Wike, the appointments were made to reduce unemployment and not to play dirty politics.

He said: “Are they not Rivers people?”

Wike added that he has received numerous messages thanking him for the appointments.