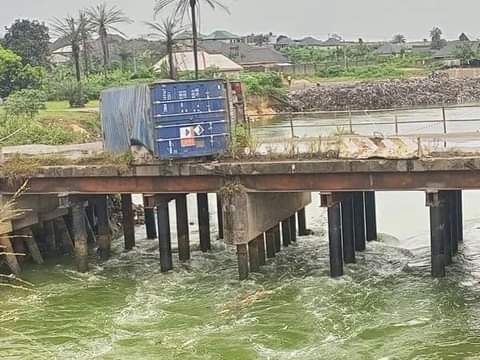 The fully loaded container that knocked two vehicles into the Aleto River in Eleme LGA of Rivers State, before falling on top of the bridge.

A fully loaded 40ft container has knocked a Toyota Hilux and a Sienna car into the Aleto River in Eleme Local Government Area of Rivers State, before falling on top of the bridge.

The accident has caused heavy traffic on the deplorable Eleme axis of the East-West road.

An eyewitness, Chinwi Ate who shared information about the accident on his Facebook post on Friday said attempts were on to rescue the victims in the Toyota Sienna Saloon Car and Toyota Hilux.

It is yet to be ascertained if lives were lost in the accident.

“Information reaching me now has it that a trailer loaded with a 40ft container just fell on top of Aleto Bridge after knocking a Toyota Sienna saloon car and Toyota Hilux off the bridge into the River.