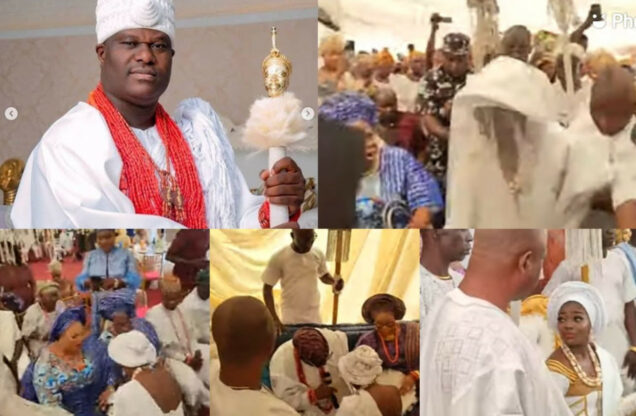 The wedding ceremony of the monarch and Adegoke took place on Friday at the bride’s family house situated on Olubose Street, along Ede road, IIe-Ife.

This year, he married Olori Mariam Anako from Ebira land in Kogi State. Olori Elizabeth Opeoluwa Ogunwusi nee Akinmuda was betrothed to him shortly after his marriage to Mariam.

Ooni married Tobi Phillips as his third wife on Sunday, October 9, before his marriage to Princess Ashley yesterday.

This is however Ooni’s seventh marriage.

Before his coronation in 2016, Oba Adeyeye was previously married to Adebukola Bombata in 2008, but the marriage failed after his coronation.

After being crowned, Ooni married Edo-born Zainab-Otiti Obanor in 2016, the union lasted for 17 months before their separation. He then married Naomi Silekunola in 2018.

Ooni’s new marriage came ten months after Queen Naomi Silekunola took to social media to announce her separation from the monarch in December 2021.

Watch videos from the event below: