Sanusi to Tinubu: 'I have no political party, my party is Nigeria' 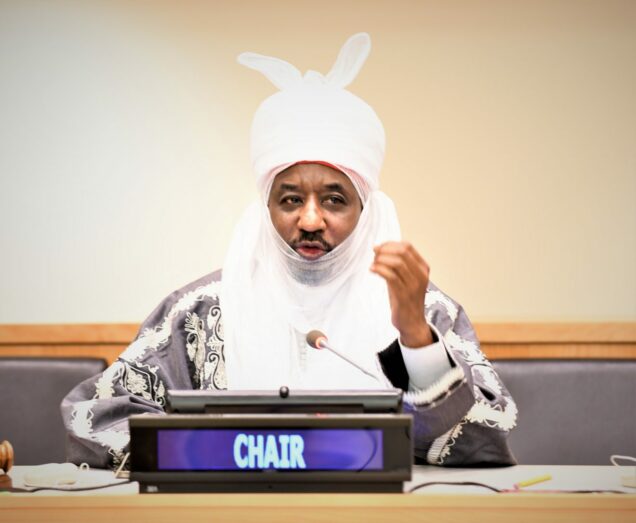 Sanusi to Tinubu: I have no political party, my party is Nigeria

Sanusi Lamido Sanusi said even the presidential candidate of the All Progressives Congress, Bola Tinubu, knows he is not a member of any political party.

Sanusi stated this in Kaduna on Saturday while speaking on the topic, ‘Improving subnational resilience against global economic shocks.

“I keep repeating, hope you remember that I lost my job at the central bank for this same problem. It is not about a particular party. I have no party. My party is Nigeria. This is the problem we had in 2014. Asiwaju (Tinubu) knows my party is Nigeria,” he said whilst addressing the audience including Tinubu.

Sanusi spoke in Kaduna State, North-West Nigeria on the occasion of the seventh edition of KadInvest, an annual event organized by the Kaduna State Investment Promotion Agency.

He called for transparency and credibility in the management of the nation’s resources and demanded the unbundling of the Nigerian National Petroleum Company (NNPC) Limited.

Sanusi said NNPC is not a cash cow but should be run as an independent enterprise with high-level accountability.

He described as unbelievable the claim by the Nigerian National Petroleum Company (NNPC) Limited that Nigeria consumes 66 million litres of fuel daily.

“Are we drinking the petrol?” the former governor of the apex bank queried.

He blamed the lack of revenue in the country on what he called the subsidy free-for-all.

Continuing, Sanusi said, “Nigeria has continued to be a rentier state. It does not exist for development but as a sight of rent, and extraction to make those who control the state rich to turn them into billionaires overnight.
He noted that Nigeria can’t keep pushing the brink but must come back and address the issues at hand so that future generation won’t suffer.

The ex-CBN governor, who cited a data from the Federation Account Allocation Committee, said only 50% of states generated enough recurrent revenue to cover their wages, overheads and debt services.

He said the cost of servicing debt in Nigeria with the Federal Government for the first half of 2022 was N2.597 trillion whereas revenue was N2.4 trillion.

“In other words, debt service is now 108 per cent of revenue. Every naira the Federal Government earns goes to service debt and it is not enough, it has to borrow to service the debt, and then begin to pay salaries, borrow to pay overheads, borrow to build roads,” he said.

‘We Are Leaving A Mountain Of Debt For Our Children’

“Let me ask you: what do you think we are leaving our children behind (with)? A mountain of debt. Every generation wants to leave a legacy so that our children and grandchildren will be praying for us and ask God for mercy on us, not cursing us.

“You leave them with a mountain of debt, you have not educated them, money that will should put into their education, into their healthcare, even assuming this fuel subsidy is genuine, we have taking that money to give ourselves cheap petrol. We are borrowing to enjoy cheap petrol so that our children will oay that debt.

“We see the problem and we are going to continue. I’m sorry for the next president who comes in June and says I’m removing fuel subsidy on day one. I don’t know what kind of political stability you’ll have,” Sanusi stated.

At the event on Saturday, President Muhammadu Buhari was represented by the Minister of State, Industry, Trade and Investment, Maryam Katagum.