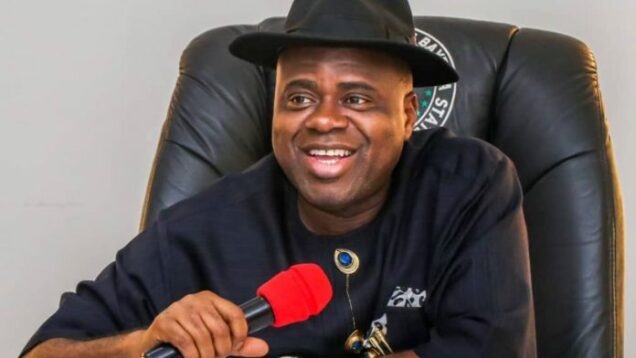 The Bayelsa House of Assembly on Wednesday approved a request by Gov. Douye Diri, to obtain another loan of N30 billion.

The request was contained in a letter forwarded to the legislative arm by Diri which was read on the floor of the House by the Clerk.

According to the letter, the loan will be used to fast track the ongoing projects in the state.

The projects include the outer ring road, AIT/ Igbogene road, and other major projects in the state.

The News Agency of Nigeria (NAN) reports that part of the loan will also be used to kick-start the Nembe/Brass road which has been on the drawing board for many decades.

Speaking in favour of the loan, the Leader of the House Hon. Monday Obolo, representing Southern Ijaw Constituency 1, said that everybody in Bayelsa was aware of the number of projects that were ongoing in the state.

He urged the house to approve the loan in order to ensure inclusive development in the state.

The Speaker of the House, Rt. Hon. Abraham Ingobere, said the loan was for the development of the state and would cut across the three senatorial districts.

Ingobere described the governor as a prudent man, noting that he had judiciously used the state resources well.

He said that he had no doubt that the governor would also use the money for the purpose it was meant for if the loan was approved.

“For Bayelsa state to be economically viable, we must take roads to the hinterlands and make sure the roads hit the sea. The money, if collected will not affect federal allocation into the state.

“Workers’ salary will not be affected; pensioners will get what is due to them at the end of the month.

“Nobody’s salary will be affected; hence we will support the loan and throw our weight behind the governor.

“The loan will be repaid through the expected money to the state deducted overtime by the Nigerian National Petroleum Corporation as part of 13 per cent derivation,” he said.

The 24-member House unanimously approved the loan request to be sourced through commercial banks or capital market through bond. (NAN)