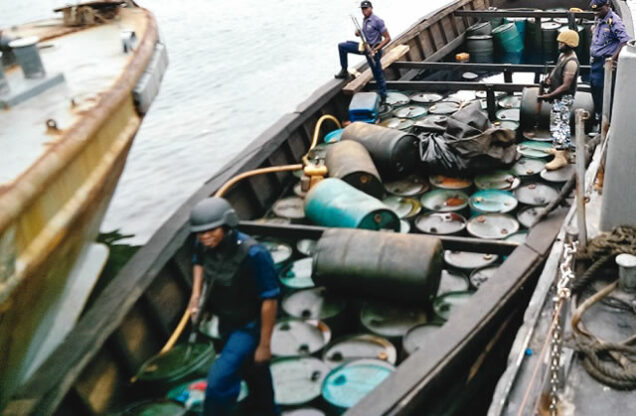 The Nigerian Navy, Forward Operating Base (FOB), has seized 9,250 litres of products suspected to be Premium Motor Spirit (PMS) in Mbo, Akwa Ibom.

Lt.-Cdr. Daniel Onyemaeze, the base operating officer, disclosed this while handing over the exhibits to the Nigeria Security and Civil Defence Corps (NSCDC) at Ibaka on Wednesday.

Onyemaeze explained that the seizures were made on Saturday, Sept. 24 and on Tuesday, Oct. 11 respectively during routine patrol operations by base operatives of the waterways.

“This is in line with the mandate of the Chief of Naval Staff (CNS), Vice Admiral Awwal Gambo, to curtail illegal activities and criminal activities in the waterways,” Onyemaeze said.

He said that the suspects on sighting the Naval personnel jumped into the ocean and escaped into the creek.

According to him, exhibits recovered include; three small wooden boats, two fibre boats, and 37×250 litres of products suspected to be PMS.

“In compliance with reference A on behalf of the Nigerian Navy, FOB Ibaka, I hereby hand over three wooden boats, two fibre boats with 37 drums of products suspected to be PMS to NSCDC,” he said.

He said that he would ensure that the exhibits reached the office.

“On behalf of my State Commandant, Mr Suleiman Mafara, I hereby receive the exhibits arrested by the Navy.

“I have witnessed that the 37 drums of products suspected to be PMS, three wooden boats and two fibre boats are in all good condition,” he said.

He promised to deliver the exhibits to the NSCDC office for further investigation and prosecution of the suspects found with the items.