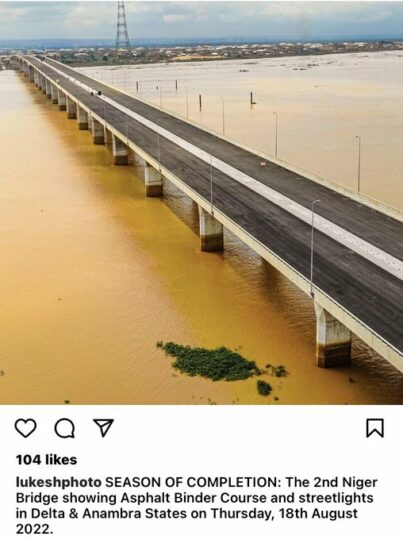 Another view of Second Niger Bridge

The Federal Government on Wednesday said the construction of a four-kilometre link road on the Asaba side is what is delaying the unveiling of the completed Second Niger Bridge.

Minister of Works and Housing, Babatunde Fashola spoke at unveiling of the President Muhammadu Buhari’s scorecard series (2015-2023) on Wednesday in Abuja.

The minister said the bridge had been completed and that people could walk through it now unimpeded.

He said, “I can confirm that the second Niger bridge itself is finished. People can walk through the bridge now unimpeded. What remains is the four-kilometer link road on the Asaba side,” he said.

Fashola said right now, government’s dredger was in place to rebuild the road by reclaiming sand, adding the recent surge had slowed down the work.

According to him, “Right now, our dredger is in place, we have to rebuild the road by reclaiming sand, the recent surge of flood has slowed us down. On the Onitsha side, there is a 7kilometer road that links the bridge and the Onitsha-Owerri interchange.”

Fashola also said that 12 road projects covering about 896km had been completed, commissioned and handed over to their communities in the season of completion and impact.

He also said the government is executing 83 road rehabilitation projects in federal tertiary institutions across the country with 66 projects completed and 46 commissioned.