Obaseki: What Atiku told me about Obasanjo's administration 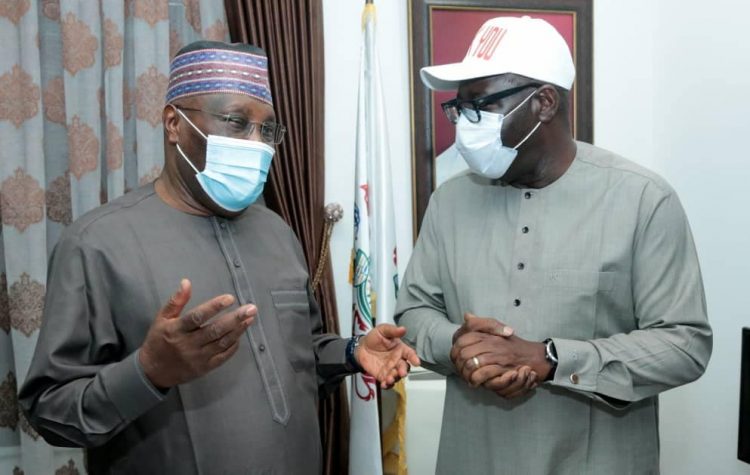 Edo governor Godwin Obaseki has revealed that Atiku Abubakar, the presidential flag bearer of Peoples Democratic Party, PDP, always referred him to the achievements of the administration of Olusegun Obasanjo he was part of in 1999.

Obaseki spoke while addressing the council members shortly after their inauguration of PDP presidential campaign council ahead of the 2023 general elections on Friday
in Benin, the capital of Edo State.

Trying to convince members of the party on why they should work hard for the victory of the party, the Edo State Governor said Atiku presidency will replicate what the Obasanjo presidency did in 1999 which he always told him about.

“He (Atiku) said do not forget when we took over in 1999, Nigeria was as divided as it is today. The military has been there for a long time, the democratic culture has ceased.

“He said the same tools we used then to make sure we bring Nigeria back together, we will deploy it this time.

“The economy of Nigeria was in shambles in 1999. Oil production and prizes had collapsed. He and Obasanjo came in,” Obaseki said.

The governor also said that Atiku told him that he was in charge of the economy, and all the things that kept Nigeria going, the debt relief we got, all the investments they had to make.

He said that the PDP presidential candidate also explained to him how they fought in Odi to send a lesson that nobody could vandalise pipelines or nobody could hold this country to ransom.

“All of those they did at that time, today the same man is coming and he is giving another opportunity to help us salvage our country.

Obaseki added that winning Edo in the forthcoming presidential elections was not in contention, adding that Edo had always been the home of PDP.

“So, who are we, when they call on us to come out to rescue this country. You were here in the beginning and some of you had to leave because of some circumstances but you are all back home.

The governor said that Edo was not in contention, and so the party only needed to ensure that it used the campaign Secretariat as a base for Atiku/Okowa election.

According to him, the office will support the national campaign, adding that there is a situation room from which it will connect other situation rooms across the country.

“This election is hand to hand combat. We have done it before.

By the grace of God, victory is ours and what you have done before during my election, I am asking you, please, do it again,” Obaseki said.

Earlier, Tony Aziegbemi, the state Chairman of the party who inaugurated the 503 campaign council members, urged them to work diligently to ensure victory for the party.

Also, Umar Bature, the PDP National Organizing Secretary, said he was convinced that the party in Edo had one leadership.

Bature urged the council members to channel all their energies towards winning the presidential elections for the party.