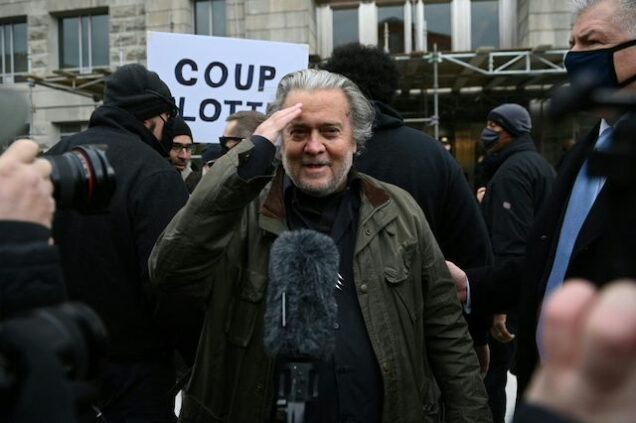 Steve Bannon, an ally of former US President Donald Trump was on Friday sentenced to four months imprisonment for defying a subpoena from the special House committee investigating the Jan. 6, 2021 Capitol attack.

Bannon was found guilty by a federal jury of two counts of contempt of Congress for after he refused to turn over documents or be interviewed by the House committee investigating the Jan. 6, 2021 attack on the U.S. Capitol.

While Bannon had initially refused to comply with the panel’s summons, citing a claim of executive privilege.

But prosecutors his actions were “aimed at undermining the Committee’s efforts to investigate an historic attack on government.”

“Throughout the pendency of this case, the Defendant has exploited his notoriety – through courthouse press conferences and his War Room podcast – to display to the public the source of his bad-faith refusal to comply with the Committee’s subpoena: a total disregard for government processes and the law,” the government’s filing stated.

“Through his public platforms, the Defendant has used hyperbolic and sometimes violent rhetoric to disparage the Committee’s investigation, personally attack the Committee’s members, and ridicule the criminal justice system.”

Bannon was jailed despite his attorney’s argument that a sentence of probation was more appropriate.

“The legal challenges advanced by Mr. Bannon were not meritless or frivolous and were aimed at protecting his constitutional rights,” attorney Evan Corcoran argued in court documents. “For these reasons, the fact that Mr. Bannon chose to put the Government to its burden at trial should not preclude him from receiving a reduction to his offense level based on acceptance of responsibility.”

The Justice Department had sought a six month prison term for Bannon and recommended that he pay a maximum fine of $200,000 for “his sustained, bad-faith.”

“From the moment that the Defendant, Stephen K. Bannon, accepted service of a subpoena from the House Select Committee to Investigate the January 6th Attack on the United States Capitol … he has pursued a bad-faith strategy of defiance and contempt,” prosecutors asserted in court documents in advance of Friday’s sentencing hearing.