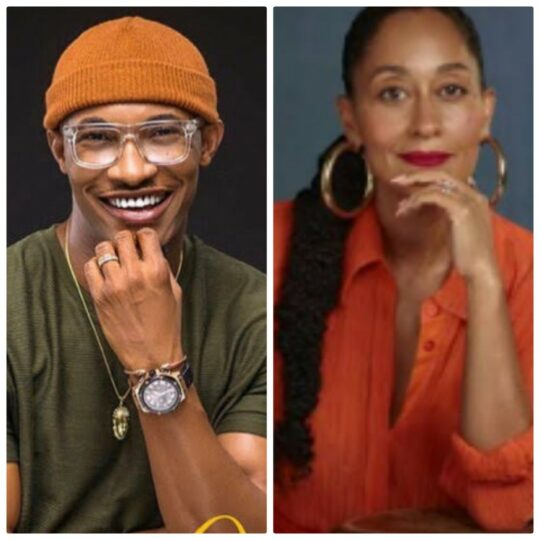 The actor, who recently confirmed separation from his marriage to Chidera, took to his Instagram page on Sunday to shower praises on Tracee.

He said: “Of all the girls in Hollywood. This here is My Spec.

“There’s just something I find savvy about the slightly advanced lady, and it doesn’t always come with age. It comes in Substance, Content. It’s that “put together appeal” that I find so darn SEXY!
Not these youngn’s in summer clothing 👙

“But the boys would always taunt Me for having “Mummy issues”… but naaa. Y’see…I’m a WHALE. I only swim in the DEEP DARK. You gotta have that depth, to contain Me. You gotta be the Ocean.”

The post has generated loads of talking points as commentators believe it was directed at Chidera.

Many stated that the “You gotta have that depth to contain Me” phrase was Okeke’s veiled response to why he left his marriage.

Who is Tracee Ross?

She is the daughter of actress and Motown recording artists Diana Ross and Robert Ellis Silberstein.

She began acting in independent films and variety series. She hosted the pop-culture magazine The Dish on Lifetime. From 2000 to 2008 she played the starring role of Joan Clayton in the UPN/CW comedy series Girlfriends, for which she received two NAACP Image Awards for Outstanding Actress in a Comedy Series.

She also appeared in the films Hanging Up (2000), I-See-You.Com (2006), and Daddy’s Little Girls (2007), before returning to television playing Dr. Carla Reed on the BET sitcom Reed Between the Lines (2011), for which she received her third NAACP Image Award.

Since 2014, Ross has played the starring role of Dr. Rainbow Johnson in the ABC comedy series Black-ish. Her work on it has earned her three NAACP Image Awards and a Golden Globe Award for Best Actress – Television Series Musical or Comedy. She has also received nominations for two Critics’ Choice Television Awards and five Primetime Emmy Awards for Outstanding Lead Actress in a Comedy Series. In 2019, she co-created a prequel spin-off of Black-ish titled Mixed-ish. In 2020, she starred in and recorded the soundtrack album for the musical film The High Note.