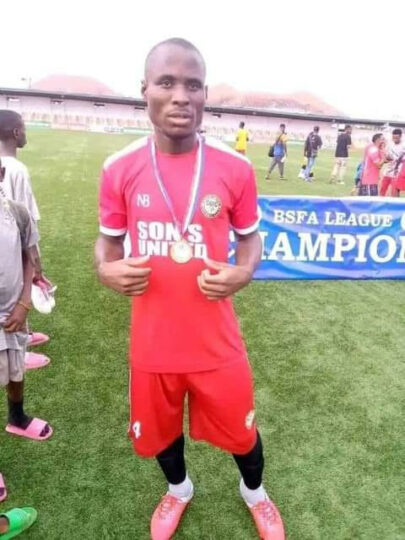 Ernest Peremobowei: the footballer who died after rescuing five people from drowning in rampaging flood in Bayelsa

Sports fans, and indeed a lot Bayelsans have been thrown into mourning since the corpse of a 31 years old footballer, Ernest Peremobowei was recovered two days after he drowned in the rampaging flood at Yenebelebiri community, Yenagoa Local Government Area of Bayelsa state.

According reports, the late Peremobowei drowned due to exhaustion after saving five other occupants of a boat that capsized in the ferocious flood in Yenebelebiri community.

Available details of the sad event indicate that the late footballer was on his way to Yenebelebiri community in company of five others when their boat smashed into the Government Jetty Barge and lost control.

It was further gathered from eyewitnesses that Peremobowei popularly known as Tido in the sad event of 19th Day of October, 2022 was able to save five passengers in their ill-fated boat.

The late Ernest who hails from Sagbama Local Government Area of Bayelsa State is a father of two children three years old son and a daughter who is 10 months old.

Like other Bayelsans sacked from their homes by flood, Ernest was sailing it to save his households items after his Bebelebiri 2 community had been taken over by water.

As he was sailing home late in the evening, he encountered some young boys who appealed to him to assist them with his boat to cross over from the Federal Medical Centre,FMC, jetty to Bebelebiri 2.

He acceded to their pleas and decided to help.

However, the tidal waves in the water that evening was too ferocious for him to control. The local hand made boat rammed into concrete pillars of a government jetty that capsized the boat.

The late Peremobowei dared the odds and was able to rescue five of the passengers onboard with him and stop them from drowning, but he was too exhausted afterwards and couldn’t save himself. His body was not found after a search party went in search of it the evening of the incident.

His lifeless body was later found floating on the water two days after the incident and was taken to Federal Medical Centre, FMC, Mortuary Yenagoa, Bayelsa State.

Before his death, Peremobowei played for Old Selected Stars of Kpansia, Eternal Grace FC EGM, SONS FC and was just invited to festival team of Bayelsa State and was hoping to report on Saturday 22, October 2022 before his untimely death.

The Brother to the deceased, Earnest Komboye, who confirmed the incident, said the brother died of exhaustion after saving five occupants of his ill-fated boat.