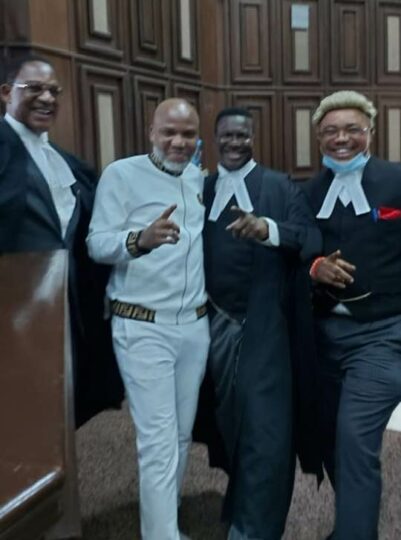 Nnamdi Kanu with his lawyers in court today

The Court of Appeal on Monday refused to grant the request of the Federal Government to adjourn the application seeking to stay the execution of the judgment that struck out the terrorism charges against the leader of the proscribed Indigenous People of Biafra (IPOB), Nnamdi Kanu.

Rather, the court gave the Federal Government till 12 noon today to move its application.

At the day’s proceedings, counsel for the Federal Government, David Kaswe, complained that he was served with a counter affidavit by Kanu’s lawyer, Mike Ozekhome, last week Friday.

Kaswe claimed that a list of one additional authority was served on him this morning and that he needed time to react to the authority.

Counsel for Kanu, however, objected to the request on the ground that only one additional authority was served and the Federal Government should have no excuse to seek adjournment because of that authority alone.

Ozekhome claimed that the government is yet to obey the court order of October 13 that ordered Kanu’s release.

He told the court that the freedom of Kanu was being trampled upon as he was terminally ill. He further urged the court to reject the request for any adjournment.

The presiding judge, Justice Haruna Tsanami subsequently gave the Federal Government till 12om today, to move its application for the stay of execution of the judgment and to respond to the fresh authority cited by Kanu’s legal team.