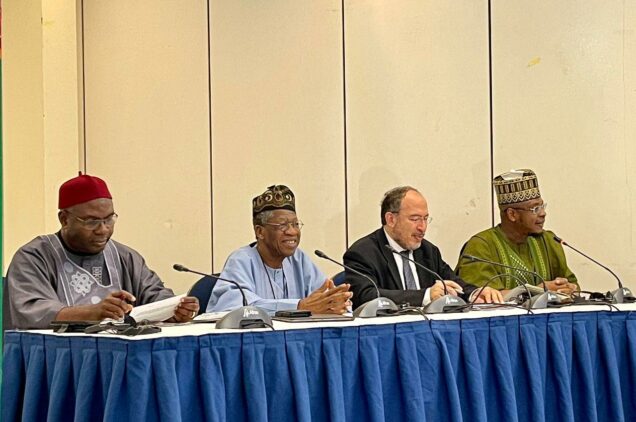 Nigerian Government on Tuesday expressed strong disapproval over security alert issued by some embassies alleging plot by terrorists to attack government and public facilities in Abuja, the Federal Capital Territory.

The United States and United Kingdom embassies in Nigeria had on Sunday issued advisories to their citizens with warning that terrorists are planning to launch attack against public places in Nigeria.

The embassies had consequently warned their citizens to be on alert and keep off such public places.

But Nigeria’s Minister of Information and Culture, Alhaji Lai Mohammed at a ministerial panel of the on-going UNESCO Media and Information Literacy Week lashed Nigerian media outlets and social media personalities for spreading the security alerts without verifying its authenticity and consequences.

Mohammed was a panelist at the UNESCO session with the topic, “National Media and Information Literacy Frameworks, Sustaining Beyond Disinformation’’ moderated by Dr Tawfik Jelassi, Assistant Director-General Communication and Information Sector, UNESCO.

In his presentation, Mohammed said the warning issued by the embassies which was not the true position of the security situation in the country could create unnecessary tension and panic.

He also condemned the media outfits which fed on the unverified security alert to attract traffic to their site without considering the effects on the country.

“Some media outlets and social media personalities are usually caught spreading unverified information on their platforms just for click bait and the attendant monetary gain.

“Talking of click bait, this may be what informed the spread of the supposed security alert issued recently by some foreign embassies in Nigeria.

“One would imagine that if indeed this kind of security alert was issued, it was for the attention of citizens of the issuing countries in Nigeria.

“Suddenly, this alert found its way into the media, both new and traditional, thus creating panic in the polity.

“Schools were shut. Businesses were closed. Travel plans were altered. Lives were disrupted. No one cared to find out about the authenticity of these alerts.

“They just published, got the benefit of massive click bait and damned the consequences,’’ he said.

He reiterated his position that the country “is safer today than at any time in recent times’’, with the efforts and sacrifices of the military.

The minister said the security forces had been proactive and as far as insecurity is concerned, the worst is over for Nigeria.

He, therefore, urged Nigerians not to panic but to be alert at all times.

“We do not discountenance the fact that terrorists, bandits and their kind would always want to do whatever it takes to disrupt

our nation’s peace, security and stability.

“Well, I can assure all that our military and other security agencies have continued to do everything possible to secure and protect Nigerians and foreigners living in Nigeria.

“Terrorists have been hard hit and put on the run. Bandits have been decimated and scattered,’’ he said.

Speaking on the theme of the session, the minister defined disinformation as “a deliberate act to spread falsehood with extreme consequences on national peace, security and stability.’’

He said the threat of disinformation to national and global peace and stability is glaring, as it undermines the trust by citizens in the system.

The minister said people must join hands to address the scourge of disinformation, that was threatening global existence.(NAN)