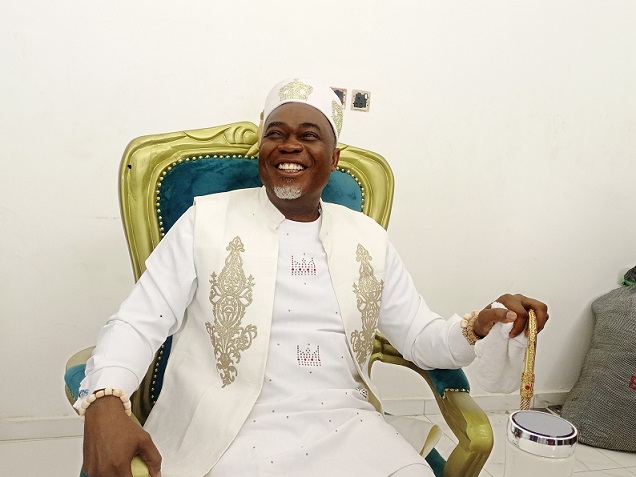 Oba Alex McGregor : says his emergence as a traditional ruler followed due process of elections conducted and backed up by the state government.

The new monarch of Ilaho community in Abeokuta North Local Government of Ogun state, Oba Alex McGregor has said his emergence as a traditional ruler followed due process of elections conducted and backed up by the state government.

The Monarch said this while reacting to the protests by some people in Orile-Ilaho/Alagbagba against his emergence as the traditional ruler of the area.

While speaking to journalists in Abeokuta, Oba McGregor said his election was free, fair and hitch free.

He disclosed that after the demise of the former Monarch, the state government was the only entity that could select a new king because the former Oba didn’t do declaration of chieftaincy to declare kingmakers nor ruling houses which makes the seat vacant.

He claimed most of the protesters were not indigenes of Ilaho community and knows nothing about the community or what it takes to become an Oba in the community, adding that his emergence was welcome and embraced by members of the community.

He also said there was never an Oba in the community until 2000/2003 when his father began the process of how the community could have an Oba because of the numbers of towns under the community.

He said his father insisted that a community that has more than 50-100 towns under it is entitled to have an Oba and his argument was successful as former Governor Chief Olusegun Osoba in 2003 agreed to install an Oba for the community.

Oba McGregor also stressed that his emergence was as a result of the good record of his forefathers and his contributions to the development of the community.

He, however, vowed to put an end to selection of Oba for the community by the government by trying to great Kingmakers with elite families that will be ruling and rotating obaship of the community after his reign.

The Monarch also pledged to bring more development to the Ilaho community.