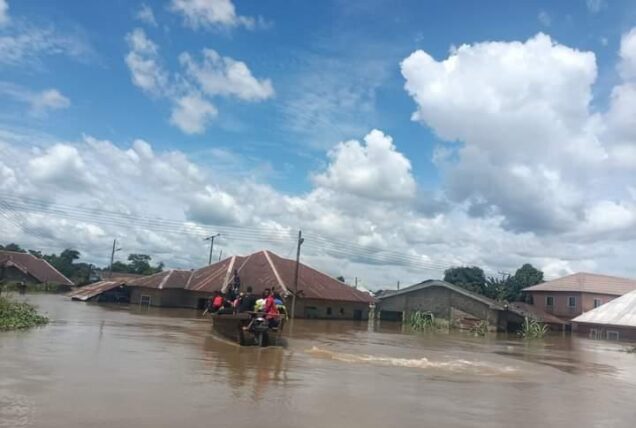 One of the flooded areas in Nigeria

The operation started with the airlift of the items from Benin by the Nigerian Air Force 107 Air Maritime Group.

He also commended the Nigerian Air Force for assistance rendered to victims and recalled similar assistance in 2018.

Dide said NEMA and SEMA would collaborate by moving to the most affected areas to distribute the items.

Mr Godwin Tepikor, the Coordinator, NEMA South-South Zone said the items approved by the Federal Government would be judiciously distributed to victims.

He said the Federal Government had long directed the issuance of relief materials to flood victims across the country.

“We could not access Bayelsa readily because the state was cut off from the rest of the country and due to that it was difficult to move down with the materials provided by the Federal Government.

“We had to rely on our partner, the Nigerian Air Force for assistance to move the items down,’’ he explained.

Tepikor commended the Chief of Air Staff for approving the platform for the airlift of food and non-food items to Bayelsa.

Only on Wednesday, Gov. Diri said Bayelsa had not received relief materials for flood victims, though 21 states were listed for immediate succour.