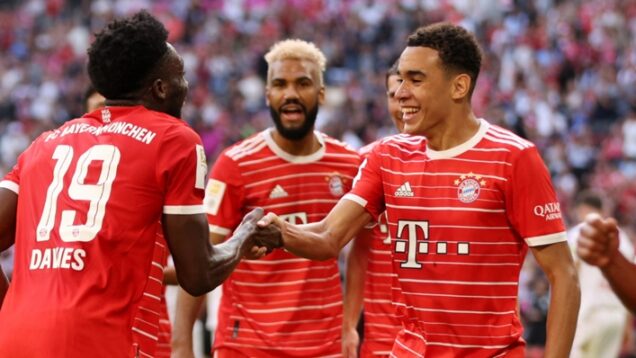 Jamal Musiala scored his 10th goal of the season as ruthless Bayern Munich thrashed Mainz 6-2 in a pulsating Bundesliga contest to go top of the table.

It had been 57 days since Julian Nagelsmann’s side were last at the summit, but they moved above Union Berlin with a sixth consecutive win on Saturday.

First-half goals from Serge Gnabry, the hugely impressive Musiala and Sadio Mane put them in command at the Allianz Arena, the Senegal forward finishing from the rebound after Robin Zentner saved his penalty.

Silvan Widmer pulled one back on the stroke of half-time just after Sven Ulreich kept out a Jonathan Burkardt spot-kick, but goals from Leon Goretzka and Mathys Tel put Bayern out of sight.

Marcus Ingvartsen capitalised on a terrible mistake from Ulreich to score Mainz’s second goal, before the in-form Eric Maxim Choupo-Moting had the final stay with a late goal against his former club.

The champions took the lead in the fifth minute, Mane cutting the ball back and Gnabry finishing with his left foot from close range after a clever dummy from Musiala.

Musiala doubled their lead just before the half-hour mark, finishing off another slick move a clinical-right foot finish after exchanging passes with Choupo-Moting.

Burkardt rattled the crossbar and Jae-Sung Lee struck the post following up before Mane added a third Bayern goal, following up to tuck home after Zentner palmed his tame spot-kick back into his path.

Referee Felix Zwayer awarded that penalty following a VAR check for Alexander Hack’s tackle on Mane and he pointed to the spot again after another check on the pitchside monitor, deeming that Ulreich had caught Anthony Caci when attempting to deal with a corner

Ulreich tipped Burkardt’s spot-kick over the crossbar, but there was more drama when Widmer nodded in the resulting corner just before the break.

Benjamin Pavard replaced the injured Matthijs de Ligt for a second half that Mainz started brightly, but Choupo-Moting almost restored Bayern’s three-goal lead when he hit an upright.

Goretzka duly got on the end of Mane’s cross to nod in the Bavarian giants’ fourth 58 after minutes and Tel came off the bench to got in on the act with a deflected strike 11 minutes from time.

Ulreich’s awful pass gifted Ingvartsen the chance to slot home in the closing stages and there was still time for Choupo-Moting to round off the scoring with his right foot after Kingsley Coman picked him out.