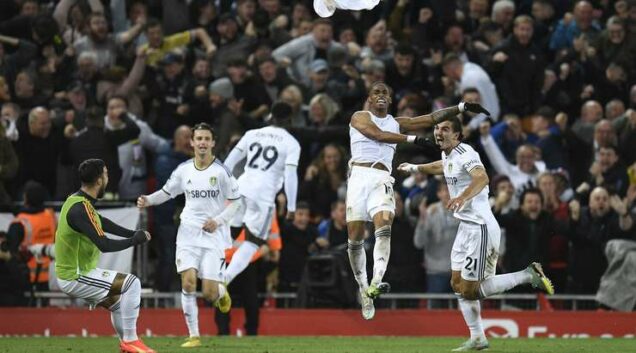 Liverpool’s poor runs in the premier league this season continued on Saturday as they crash 2-1 at Anfield Stadium to Leeds United.

The Reds are coming from a 0-1 shocking defeat to Nottingham Forest last week. They needed to beat Leeds at home to move up the table.

But it was the visitors that delivered the shocking blow at Anfield.

Leeds opened scoring in just four minutes into the game from a catastrophic error from the opponent which has gifted a chance to Rodrigo, who rolled the ball into the back of the net from close range.

Liverpool equalised on 14 minutes. Andrew Robertson put a cross into the box and found Mohamed Salah, who latched on to it and struck the ball inside the right post.

Seven minutes later, Brenden Aaronson almost put Leeds in front again as he controlled a cross deep inside the box and hit the crossbar.

On 67th minute, a pass into the box found Darwin Nunez unmarked. He carefully placed a shot towards the left side of the goal, but a brilliant last-ditch save by Illan Meslier denied him.

On seven minutes to duration time, Roberto Firmino received a precise pass in the box and took the shot early. The ball headed towards the bottom left corner, but Illan Meslier showed off his skills and made a brilliant save to deny him.

On minute to duration time, Crysencio Summerville pounced on a loose ball inside the penalty area and beat the goalkeeper with a shot into the bottom right corner to make it 1-2 for the visitors and Liverpool never recovered after that.