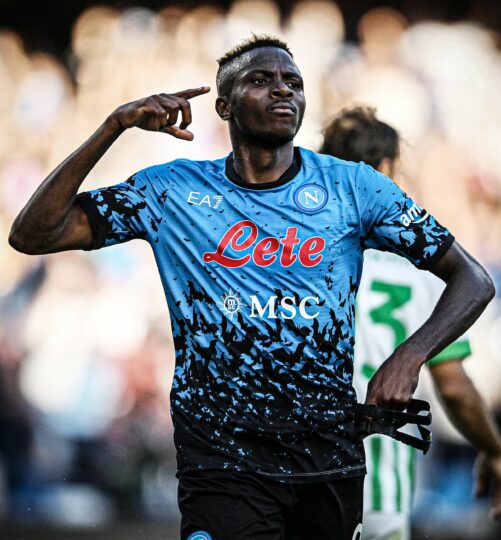 Victor Osimhen scored a hat-trick as Napoli defeated Sassuolo 4-0 in Serie A game played this weekend to ensure his team dominated.

The Nigeria forward scored three goals as his team extended their unbeaten run this season with a 4-0 win in the Serie A fixture staged at the Diego Armando Maradona Stadium on Saturday.

The in-form Super Eagle striker was in the right place to poke home Khvicha Kvaratskhelia’s header after just four minutes.

The 23-year-old came close on several occasions and his zeal was rewarded in the 20th minute when the duo combined once again with the West African showing great composure to find the back of the net.

In the 32nd minute, Osimhen managed to get past his marker before making an attempt. However, the defender was in the right position to stop the ball from crossing the goal line.

Kvaratskhelia ensured the Naples-based team went into the break with a 3-0 lead after connecting a Mario Rui’s lofted cross.

The red-hot Osimhen then completed his hat-trick in the 78th minute when he spotted the goalkeeper off his line and he lifted the ball over him and into the back of the net.

The Nigeria international has now scored seven goals in the ongoing campaign, and with his exploits, he can easily get 20 or more this season.