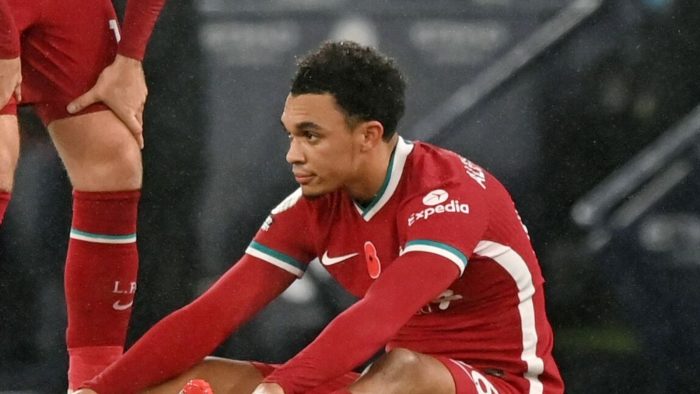 Trent Alexander-Arnold said Liverpool must “get some points” at Tottenham to get their “aims and aspirations” back on track.

Jurgen Klopp’s side are ninth in the Premier League and could fall 15 points behind Arsenal, who play Nottingham Forest on Sunday as the Gunners aim to return to the top-flight summit.

Liverpool have suffered consecutive domestic defeats against strugglers Forest and Leeds United, the latter of which on Saturday ended a 29-match home unbeaten run for the Reds in the Premier League.

Klopp’s team may take some consolation after reaching the Champions League knockout stages, though Alexander-Arnold urged his side to improve in the league at Tottenham next Sunday.

“I’d say we all believe in ourselves, we believe in the way we play, the squad and what we can achieve,” the right-back told the club’s website.

“But I think when you do get setbacks, it can potentially make you second-guess yourself and question things.

“We kind of need to go there and get some points if we’ve got any chance of reaching our aims and aspirations for the season.”

While Liverpool’s title hopes are virtually over, with Manchester City and Arsenal embroiled in a two-horse race thus far, the Reds are also eight points away from the Champions League qualification places.

The England international acknowledged Liverpool have been far from their best this season, pinpointing the Reds’ failures in front of goal, a notable problem in the 2-1 defeat to Leeds last time out.

“I think we are not in the greatest run of form – I think a lot of players would say that about themselves and as a team in general,” he added.

“But we’re still creating opportunities to score and win games. We just haven’t been able to take them, especially [in the] last two Premier League games.

“I think it’s important for us to regroup, assess what’s going wrong. I think right now, it’s kind of, ‘pick up as many points as you can now going into this break [for the World Cup].

“And potentially this break will come at a decent time for us to reset and be able to get our heads straight to go into the second half of the season.”