Plays that made Obasanjo, Emir Sanusi, others shed tears 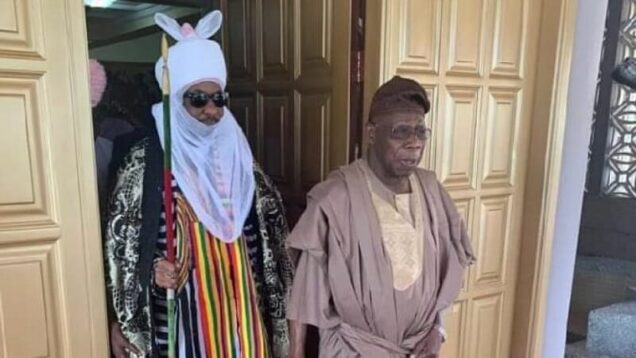 Another notable personality, amongst others, who also shed tears while watching the historical plays, according to Edgar, was Meena, a great-granddaughter of Sir Ahmadu Bello, the late Premier of Northern Region.

Among the plays produced by the outfit are Awo, Emir Sanusi, Sardauna, Aremu and Emotan.

Edgar told the News Agency of Nigeria (NAN) on Sunday in Lagos that Obasanjo climbed over to the stage and cried while watching the play “Aremu”.

The play, staged in Lagos, depicted the life and times of the former military head of state and civilian President of Nigeria.

“Obasanjo climbed the stage and cried; the story touched him, especially the role his mother played in his life.

“When he remembered his mother and the role she played in his life, he broke down and could not control the tears.”

Edgar said that the 14th Emir of Kano, Sanusi Lamido Sanusi, also cried while watching “Emir Sanusi”, a play that focused on his life, ascension to the throne, his removal, and life after he was deposed.

“Emir Sanusi cried because he saw his life in the eyes of others as the play relied heavily on the accounts of ‘Dogarai’ (palace guards).

“He felt that it was an extraordinary opportunity to be alive to witness people discussing what you did before your exit.

“Listening to his staff, especially palace guards, discussing his strengths and weaknesses, really touched the Emir.

“He also felt touched because Nigerians were honouring him in spite of his being dethroned,” Edgar explained.

He also spoke on why Segun Awolowo, grandson of Chief Obafemi Awolowo, Premier of Western Region, cried when he watched “Awo”, a play on the late sage.

“Segun cried at the point his grandmother was being told of the road accident that claimed the life of his father, the senior Segun Awolowo, who was Awolowo’s first son.

“The senior Segun, a lawyer, was on his way to Lagos to defend his father of treasonable felony charges when he died in a road accident.

“Junior Segun was in the womb of his mother when the father died.

“The emotional story of the tragic loss of his father threw him into a spin and he broke down,” Edgar told NAN.

Edgar also spoke on Meena, great-granddaughter of Ahmadu Bello, who held the title of Sardauna of Sokoto.

“Meena cried when she came face-to-face with the life of her famous great grandfather being depicted in the play “Sardauna”, staged in Abuja.

“She was touched because it was the first time his life was played on stage and she could see what she had heard over the years.

“It was her first glimpse of her famous great-grandfather and she saw the play as another form of immortalising him.

“Meena was born in the 80s while Sardauna died in the 60s; she showed deep interest in the play and worked with us to see what happened to the great leader,” he said.

He said that his outfit’s focus on historical plays had yielded the desired result as they had made a “powerful impact” across all strata of society.

“The plays have touched the leaders, followership, the youths, the old, the North and South.

“People keep seeking to participate and the theatres are always filled to the brim.

“As expected, the plays have become more expensive with ‘Emir Sanusi’ gulping close to N50 million.

“Discussants of the plays have always wondered why current Nigerian leaders have not been as good and patriotic as the past ones.

“While past leaders like Sardauna and Awolowo were committed to the general good, their successors have been busy amassing wealth.

“People have watched the plays and keep wondering where we got it wrong as a nation.

“The plays have continued to open eyes and stimulate debates. We find that very encouraging.

“The plays also unite the poor around their economic status, away from issues like religion, tribe or region. We view this ‘forced unity’ as a positive development,” he said.

He listed historical plays soon to be staged as including El-Kanemi, Ladi Kwali, Aminu Kano and Maitama Sule.

Others are Queen Amina, Sultan Attahiru, and Tafawa Balewa, among others.

He said that the plays had unified Nigerians and showed that the people were one and believed in the unity and cohesion of the country.

Edgar said he was always moved to tears when people come from the U.S, the UK and other far distances “just to watch my historical plays”.

“Some people learn Nigeria’s history from watching historical plays. I feel encouraged when they tell me this,” he said.

Edgar said that the idea of staging historical plays was especially aimed at bridging the gap between Nigeria’s past and present to help youths “understand and appreciate where we’re coming from”.

In December, the outfit plans an ambitious festival with four massive plays over three weekends in Lagos.

The plays are “Awo”, “Ufik Ibaan” – a play on the Ikot Abasi women’s revolt, and “Our Duke Has Gone Mad Again”, a satire.

Also to be staged is “Ogiame Erejuwa II”, a play on the late Olu of Warri, grandfather to the current Warri traditional ruler.