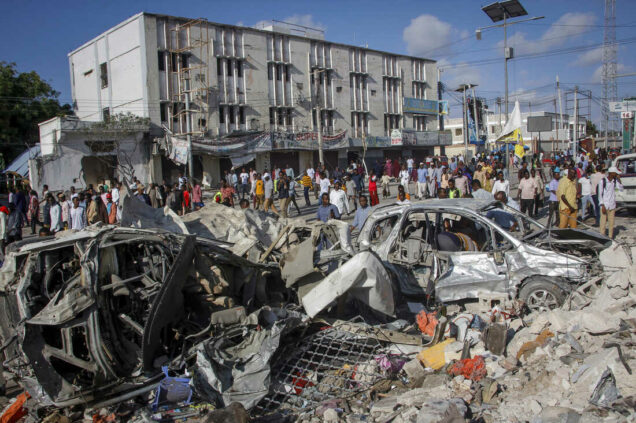 People walk amidst destruction at the scene, a day after a double car bomb attack at a busy junction in Mogadishu, Somalia Sunday, Oct. 30, 2022. Somalia's president says multiple people were killed in Saturday's attacks and the toll could rise in the country's deadliest attack since a truck bombing at the same spot five years ago killed more than 500. (AP Photo/Farah Abdi Warsameh)

President Hassan Mohamud of Somalia said no fewer than 100 people were killed in two-car bombings in a busy market in the capital.

He said the toll could rise in the country’s deadliest attack since a truck bombing at the same spot five years ago killed more than 500.

He said Saturday’s attack was the deadliest since a truck bomb exploded at the same intersection in October 2017, killing more than 500 people.

The al Qaeda-linked Islamist group al Shabaab claimed responsibility, saying the ministry was at the center of a “war on minds” that teaches Somali children using a Christian-based syllabus.

Members of the security forces were among the dead and injured, its statement emailed to the media said.

Al Shabaab, which is seeking to topple the government and establish its own rule based on an extreme interpretation of Islamic law, frequently stages attacks in Mogadishu and elsewhere.

The first of the explosions hit the education ministry at around 2 p.m. on Saturday.

The second hit minutes later as ambulances arrived and people gathered to help the victims.

Mohamed Moalim, who owns a small restaurant near the intersection, said his wife, Fardawsa Mohamed, a mother of six, rushed to the scene after the first explosion to try to help.

“We failed to stop her,” he said. “She was killed by the second blast.”

President Mohamud said some of the wounded were in serious condition and the death toll could rise.

“Our people who were massacred … included mothers with their children in their arms, fathers who had medical conditions, students who were sent to study, businessmen who were struggling with the lives of their families,” he said after visiting the scene.

The K5 intersection normally teems with people buying and selling everything from food, clothing, and water to foreign currency and khat, a mild narcotic leaf.

But it was quiet on Sunday, with emergency workers still cleaning blood from the streets and buildings.