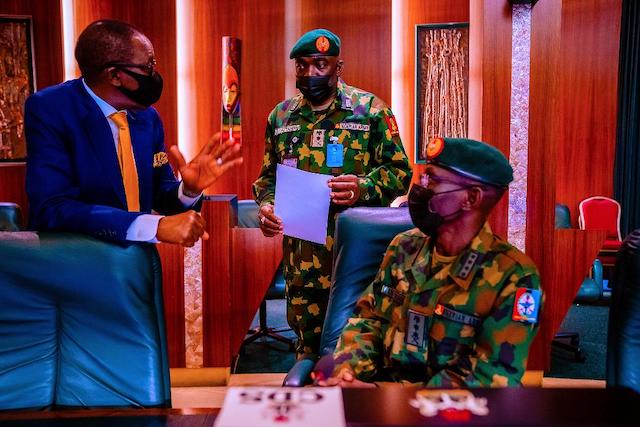 At the meeting of service chiefs with Buhari: L-R Monguno, Attahiru, Leo Irabor

Babagana Monguno, national security adviser (NSA), says the security situation in Nigeria does not warrant travel advisories and terror warnings from the United States (US) and the United Kingdom (UK).

While the US authorized the evacuation of non-critical staff in the country, the UK had asked its citizens not to embark on “non-essential” movements in the federal capital territory (FCT).

President Muhammadu Buhari responded by saying that despite the terror alerts, attacks are not imminent.

“However, it does not mean an attack in Abuja is imminent. Since the July prison raid, security measures have been reinforced in and around the FCT,” he had said.

Speaking with reporters after a security meeting at the instance of Buhari at the presidential villa on Monday, Monguno said the Nigerians are not in danger.

The NSA urged Nigerians to go about their lives, adding that the security agencies are putting measures in place to forestall any attack.