Africans must come together for greater, prosperous continent - Obasanjo 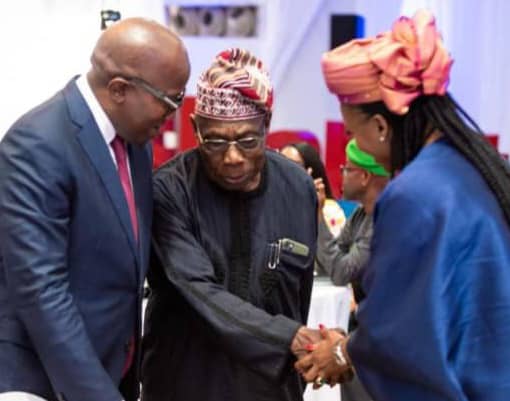 Obasanjo and others at the event

Former Nigerian President,  Chief Olusegun Obasanjo has disclosed the need for Africans to come together for greater prospects of the continent.
Obasanjo made this disclosure in Kinshasa, Democratic Republic of Congo on Monday, when he led two Nigerian Governors, four industrialists, security and energy experts among others on investment drive to the Central African country, with request from President Felix Antoine Tshisekedi Tshilombo.
In a statement by Obasanjo’s Special Assistant on Media, Kehinde Akinyemi in Kinshasa on Tuesday, Obasanjo emphasised that there was need for Africans to come together for the greater prospects of the continent irrespective of their countries.
At the International Business Forum organized by the Makutano Network for the visiting team, Obasanjo said that it was imperative to understand that African investors should tap into the potentials in Congo.
He noted that with the peculiarities of the country, including, being the only country that border 9 other countries, being the only country in Africa with two time zone and not being ‘muzungu’, “the delegation is here and have come to stay and do business in DRC,” Obasanjo asserted.
He stressed further that the money to invest in Africa is in the continent, “as such, we must ensure that we create that conducive environment to get that money for these investments to come up in the country.
“As said earlier, we have come with people that have something to offer, something to learn from. This meeting will not be like the usual meetings that will end here. I don’t want that to happen.
“We have to form the Nigeria/DRC business Council or whatever name will call it for the continuity and progress of this meeting today.”
The Nigerian former President named Congolese-born Dr. Nteraya Sanginga, the Director General IITA as the Interim President of the body. He also disclosed that the Kaduna State Governor, Mallam Nasir El-rufai will serve as the Interim Deputy President, while Pacific Kahasha
and Amb. Leke Adebiyi will be Interim Secretary and Interim Deputy Secretary respectively.
Others were Nicole Sulu as Ex-officio and Okey Opara while Obasanjo himself, and President Tshisekedi Tshilombo will be Patrons.
Obasanjo charged the council to starts work immediately, saying, “after 6 months the council performance will be reviewed.”
Earlier, the President Tshisekedi Tshilombo hosted the delegation to a dinner where he disclosed and commended the role of Obasanjo in the quest to transform DRC into an industrialised country.
He said that, “Baba accepted my request to bring prospective investors to Congo when I told him, and I must say I am very happy and pleased to welcome you all. He is father of Africa and the people of Congo will continue to appreciate him for his role in bringing peace and unity here.”
The former President delegation to the DRC includes Chukwuma Soludo, the governor of Anambra State, Mallam Nasir El-Rufai, the governor of Kaduna State, Gen. Martin Luther Agwai, Professor Bart Nnaji, Professor Peter Okebukola and Ambassador Robert Adeleke Adebiyi.
Others were Semiu Kolawole Adesina – Sahara Energy Limited Nigeria, Ajibola Adebutu – CEO/Founder JB Farms Lagos Nigeria, Mrs. Stella Okoli – Founder and CEO Emzor Pharmaceuticals Industries Limited, Dr. Edem Adzogenu–Co-Founder, Afro-champions, Dr. Nteraya Sanginga – IITA Director General and Jimi Lawal – Senior Adviser and Counselor to Kaduna State Governor.
Tags:   Chief Olusegun Obasanjo