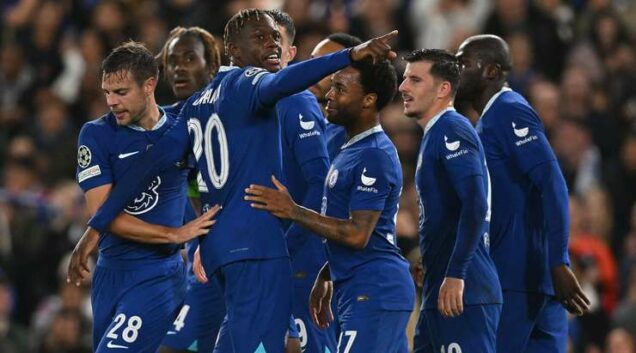 Chelsea came from a goal down on Wednesday to beat Dinamo Zagreb 2-1 at Stamford Bridge to end up as Group E winner in Champions League group stage.

The visitors took a shocking lead in just seven minutes into the match.

Bruno Petkovic proved he is got the killer instinct as when totally unmarked inside the box, powering a crashing header past the helpless goalkeeper.

Pierre-Emerick Aubameyang played in Sterling, who showed great determination to get to the ball before a couple of defenders and from inside the box slotted the ball into the bottom left corner.

Chelsea made it 2-1 on 30th minute. Denis Zakaria pounced on a loose ball inside the box and beat the goalkeeper with a low shot into the middle of the net.

Zagreb almost equalised on 50th minute. Josip Sutalo leapt high to meet a precise cross from the corner, directing his towering header inside the right post, but the goalkeeper denied him with a miraculous save.
Three minutes later, Aubameyang wasted a promising chance. He tried his luck with a shot from mid-range, but his effort hits the crossbar.
Dominik Livakovic was forced into action to thwart Conor Gallagher’s effort on 85th minute. He found himself some space after latching on to a pass and unleashed a shot to the right post but could not beat the keeper.
Tags:   Chelsea   Dinamo Zagreb